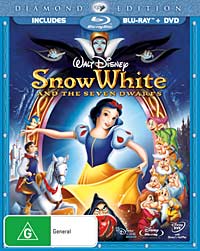 During the Second World War Snow White and the Seven Dwarfs saved Walt Disney's studio. It was losing money doing propaganda production for the government, so to keep itself going, Disney dug out the then seven year old movie -- the first full length feature the company had made -- and re-released it. Thus was born Disney's 'Vault' policy of tucking away selected titles for several years while waiting for a new generation of children.

I won't talk about the movie, which just about everyone has seen anyway, but instead about this Blu-ray release.

The sound was, well, interesting. According to the opening credits, it was 'Recorded By R.C.A. Victor "High Fidelity" Sound System'. As presented on this disc, it comes in 7.1 channels, losslessly held in DTS-HD Master Audio format, with 24 bits of resolution and 48,000 hertz sampling.

If it weren't losslessly compressed, this would consume some 9.2Mbps of bandwidth. This movie manages an average of 3.733Mbps, which is rather on the low side for this format. Other 7.1 channel DTS-HD Master Audio discs I've checked run from over 4Mbps ('Prince Caspian') to nearly 6Mbps ('The Golden Compass'). The one exception is 'Sleeping Beauty', which required only 2.591Mbps.

In fact, this movie shouldn't require a high bitrate for the sound, and the centre rear channels are probably overkill, because there is generally little surround. Indeed, there's no significant stereo spread for the great majority of the movie. Some orchestral width was added from the original recordings, while almost everything else comes from the centre. Only occasionally, such as when the Queen is preparing her potion, are some surround effects applied. I take these to have been specially added for one of the modern releases.

As for 24 bits, well the eight least significant bits of this were probably encoding with great accuracy low level white noise.

Still, it sounded generally very good ... for a movie released in 1937. The upper frequencies were rolled of reasonably naturalistically, reducing the upper midrange/lower treble harshness. In general, the only real significant stresses suggested by the sound were during massed vocals, when things could get a bit crunchy. I checked the frequency spectrum of the sound track, and there was clearly a definite shoulder at 8.5kHz, with a cliff down to the noise floor.

Snow White's voice tended to shrillness, but I think that this was how the singer sounded, rather than a defect in the recording.

The bass is generally quite light as well, except that some deep stuff has been added to the LFE for thunder and the like. This was too clean, deep and powerful to have been original.

But for a 1937 original, this restoration has worked wonders, and I doubt that it looked or sounded this good when first viewed at the Carthay Circle Theater way back in 1937.

But before we do that, let's briefly look at the previous PAL DVD release (purchased by me some years ago). The details to the bottom are scaled at the application level from 720 pixels wide to 768, so as to conform to the 4:3 aspect ratio of this movie, otherwise were unscaled or otherwise altered. The one on the left is the older DVD. The one to the right is the new DVD.

The colour is definitely different between the two versions (I used the same application to extract both). Which is more accurate? I guess we'd best accept Disney's judgement on that one. The newer version certain seems to be vibrant. The new DVD also tends to be a little sharper in just about all frames.

Now, to the Blu-ray. In these comparisons I use the new DVD version.

In the following examples, at the top of each is the full frame (suitably shrunk down) used in the comparison, with a 250 pixel wide detail from the frame underneath. The left side is from the PAL DVD. The image was captured digitally from the disc (using VideoReDo Plus), scaled up from its native 720 by 576 resolution to 768 by 576 (to present in the 4:3 aspect ratio) by the application. Then, in order to be comparable to the Blu-ray version, I scaled it from that to 1,440 by 1,080 in Photoshop. The detail is from that last scaled version, and has not been rescaled again. The right side is from the Australian Blu-ray (captured using the command-line media player MPplayer). This has not been scaled at all.

Since different applications were used to capture the two frames, I am not normally comfortable comparing the brightness or colour between the two. For those visitors from NTSC lands, generally PAL DVDs are just a touch sharper than NTSC DVDs.

1937 was a long time ago. Film technology wasn't able to produce the razor sharp images of today's modern images. Technicolor was itself new. All these came together to limit the resolution available for Snow White. Even though I would have expected the sequential exposure method of shooting apparently used for this movie to have yielded increased detail, there really is very little difference between the Blu-ray and the DVD on that front in the following shot. Perhaps the major distinguishing characteristic is the presence of some MPEG2 compression noise in the DVD:

Once again, it is compression noise on the DVD version that most differentiates the Blu-ray and DVD versions. On this face, some detail -- already soft for the reasons mentioned above -- are nearly lost under noise. The DVD also seems to have a few bits of edge enhancement:

The MPEG2 compression of the DVD in this shot gives Dopey's face a stippled appearance, and note the additional compression noise around the wrinkles of his cap. At the bottom of the large rock behind him one of the cracks showing on the Blu-ray has been completely lost:

As we can see here, Blu-ray can't provide more detail when there is no detail to get from the original source film:

But I thought it would be interesting to zoom the queen's face in by 300%. This reveals a loss of distinctness around the mouth on the DVD, plus the ubiquitous MPEG2 compression noise: