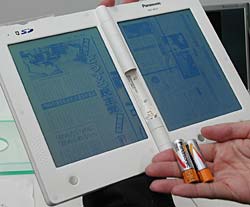 Thursday last week in Tokyo was my last day in Japan. In the morning we went to the Panasonic Centre, which is largely a high tech display of Panasonic products, technologies and visions for the future. A fair bit of interesting stuff there, including Panasonic’s transparent panel speakers. Still trying to determine precisely how they work (apparently it’s something to do with a driver in close proximity, but not actually touching, the panel). Anything but high fidelity sound (very coloured, crunchy upper midrange) but obviously a useful device in many circumstances.

The most interesting device was the Panasonic E Book (model BKE-AW-N7). Concept is simple, a light weight, low powered pair of LCD panels that fold like a book. Stick in a Secure Digital card with electronic books in it and you can read them on the screen. Nothing too revolutionary there. But this thing runs on two AA batteries for a claimed three to six months. How does it manage that? The trick is that the LCD screen draws no power during static display, only when the page is updated. The photo (which I took) shows the display in operation with the batteries removed. Clever huh?

Far from perfect: monochrome only, no backlight and the contrast was quite low. Still, another couple of years of development and this could be a real killer technology. The screen’s resolution also seemed to be very high. Current price: 37,900 yen, or around $AUS500.

That afternoon we went through the Edo-Tokyo museum which had a bunch of fascinating displays showing the four hundred year history of the city. Lots of artifacts, a slightly cut down version of a famous wooden bridge, and some incredibly detailed street models (see photo). The people are only around a centimetre tall. No home entertainment technology there worth mentioning, though.

Interesting plaque describing the 1930s: ‘It was during such a period that the “Manchurian Incident” occurred in September 1931, followed by the founding of Manchukuo in the northeastern part of China. These events not only affected Japan’s relations with China, but also disturbed the international order and Japan’s position in the international community. With the Marco Polo Bridge Incident in the suburbs of Beijing in July 1937, Japan plunged into all-out war with China … [Some discussion of war time conditions] … Then, in December 1941, the Pacific War began.”

Interesting take on these things. Particularly how they just kind of happened. Clearly there is not much of a ‘black arm-band’ view of history at this museum at least.

This entry was posted in Misc, Travel. Bookmark the permalink.