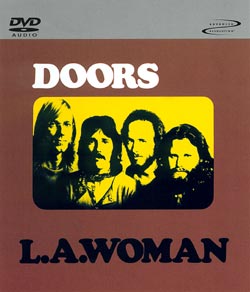 I’m in the middle of reviewing a pentuplet of DVD Audio players and, thinking I knew it all, stumbled across something new to me: DVD Audio bonus groups. Now the DVD Forum, in its wisdom, chose to abandon the familiar Title/Chapter nomenclature from DVD Video when specifying DVD Audio. Instead it uses Group/Track as the primary divisions between material, with Page for different video screens capable of being shown without interrupting the audio flow (for example, you might be able to choose between lyrics and photos, while the music plays on regardless).

I had previously noticed on some DVD Audio players a ‘Bonus Group’ setting on the Setup menu, but hadn’t thought much of it. In the current round, though, I chose The Doors L.A. Woman to audition a player. Checking its navigation facilities, I keyed through the four Groups available on the disc (Group 1 is the surround mix, Group 2 is the stereo mix, Group 3 is the film clip in Dolby Digital, and Group 4 is the Elektra Entertainment logo). But there is also a Group 5, which is apparently a ‘Bonus Group’. See the screen shot below, which shows the password entry panel that is brought up when you navigate to this Group using the ‘Search’ key on an Onkyo DV-SP800 DVD-V/DVD-A/SACD player. There appear to be no menu or other links to this Group on the disc.

Googling around has no information specific to bonus groups on any discs, although a PDF format DVD Forum recommendation for DVD Audio, dating from early 2000, says that a bonus group, alternatively known as a ‘hidden group’, should be accessible using a four digital number (although it does not insist on a link to the group within the disc’s menu system). 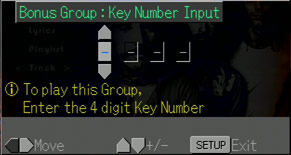 What is does recommend is information:

3.2 For Disc Jacket and Booklet, etc.
When a disc has a Bonus Group,

Well this disc does not have any indication on its jacket that there is a bonus group. It is quite possible that the addition of a bonus group was unintentional. Sometimes, particularly in the early days of mastering a new technology, the people involved have trouble working how to turn certain facilities off. For example a number of early Roadshow titles in Australia have silent MPEG audio tracks because, apparently, the mastering people thought that there was no facility to completely omit MPEG (maybe this was the case with their early software).

The whole concept of a bonus group is a bit confusing anyway, since quite a few DVD Audios have ‘bonus tracks’ (sometimes in their own groups!) If this is used, the better terminology would be ‘hidden group’.

Looking through my DVD Audio collection, I now discover that the following discs have bonus groups (although no mention of such on their jackets):

The problem is, I don’t want to key through the average of 5,000 numbers that it would take to crack the code on each! Assuming, even, that there is a valid code.

This entry was posted in Audio, Disc details, DVD. Bookmark the permalink.