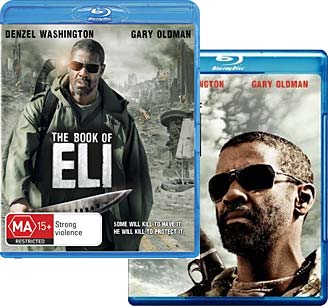 Well after my little rant yesterday, how about something rather more positive?

The answer to my question in the title is: ‘Of course they do.’ The more important question is: how much?

My view is that once you get up to about 15Mbps for 1080p24 content, there isn’t much in the way of improvement available by going higher.

As a matter of principle, I also reckon that if the space is available, it should be used for a higher bitrate. Why not, after all?

It is difficult to judge whether my view is right without rigorous tests. These would ideally be double blind trials in which segments of both versions of the movie were viewed, in which both the tester and the people being tested don’t know which version is which, and in which the only difference between the two versions is the average bitrate employed in the encoding process.

But I do what I can with what I have. And what I have are a matched set of frame grabs from the US and Australian versions of The Book of Eli, a movie released in 2010.

Cinema Squid captured the US frames and I captured the matching Australian ones. And now you can take a shot at trying to see the difference between them in my new Blind Blu-ray Test: The Book of Eli.