Blu-ray blows, or how to let the opposition win

I must confess that in the Blu-ray vs HD DVD stakes, I’ve been somewhat partial to Blu-ray. I think it has been because of the larger capacity of the disc than HD DVD, at least in their first incarnations (HD DVD will be able to support 51GB on three layers apparently). And because Blu-ray was supported by Panasonic, Pioneer and Sony, which are brands that I respect. (No disrespect to Toshiba intended though, but three to one does carry a bit of weight with me.) 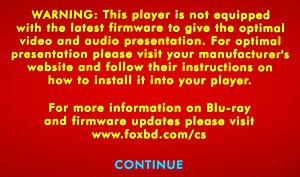 But now I’m rapidly going off Blu-ray, and leaning towards HD DVD. For two reasons. First, the other day I purchased four Blu-ray discs from Amazon. They were Chicago, The Prestige, Deja Vu and King Arthur. I figured that I’d be safe from region code issues because none of these were new movie releases. Damn, King Arthur was released way back in 2004!

But when they arrive, I find that all but Chicago were Region A encoded, and thus unplayable on Australian Blu-ray players. From now on, I purchase from overseas only HD DVD, or Blu-ray from Warner Bros. Why the latter? Because WB releases on both Blu-ray and HD DVD. It seems that they don’t bother to apply region coding to Blu-ray, since the titles are on HD DVD as well. All four of the above titles are from Buena Vista. More information on Blu-ray region coding is here.

One strike against Blu-ray. The second strike? Today I received a test Blu-ray of Die Hard 4.0. No sooner does it load into the brand new, new model, Pioneer BDP-LX70A than the accompanying message shows up on the screen.

Blu-ray and HD DVD are supposed to be consumer devices. One should not be required to upgrade firmware on a consumer player to make it support discs for playback. As it happens, this disc does appear to play back okay, but the pop-up menu seems rather basic. What is it missing, if anything?

UPDATE (Thursday, 29 November 2007, 11:37 am): I have just received an email from Pioneer advising that a firmware update for the BDP-LX70A was released through Pioneer’s service network on 21 November (the same day as the original post). Here are the details regarding the update:

Nevertheless, the point stands that Blu-ray seems to be, compared to HD DVD, an unstable platform. Pioneer adds:

As we understand, there may be continuing issues such as this, as the firmware is set when the players are produced, yet the software manufacturers are releasing more and more titles with this interactive Java content after the release of our players. Hence minor upgrades from time to time may be appropriate.

I can assure you that we are doing our best to stay on top of this situation.

Incidentally, as far as I can work out the disc was fully supported by the Pioneer player once you’d gone past that message.