The Simpsons joust with Disney 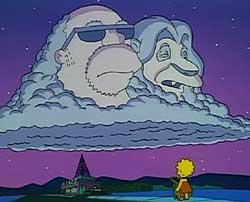 The Simpsons have a lot of fun with copyright in many episodes (Mary Poppins, for example), but watching the episode ‘Round Springfield‘ (Season 6, Episode 22, code 2F32), even more fun is had. Towards the end, moments after the deceased Bleeding Gums Murphy appears in a cloud to Lisa, The Lion King’s Mufasa pops up next to him and says, ‘You must avenge my death Kimba, ah, I mean Simba.’

Nice play, given the allegations that Disney, one of the most vigorous protectors of its own copyrighted material, ripped off the 1960s animated Japanese TV show ‘Kimba the White Lion‘ (link is to the 1994 US re-release) for The Lion King.

But, then, Disney was doing this from the outset. Its 1928 Mickey classic Steamboat Willie also ripped off the 1928 Buster Keaton movie Steamboat Bill, Jr.

This entry was posted in Copyright. Bookmark the permalink.