Must Have DVD: Master and Commander 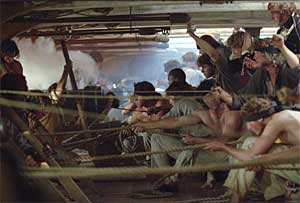 I watched the new DVD of Master and Commander: The Far Side of the World last night. For some reason I didn’t catch it at the cinema. It’s a fine movie, giving a real sense of the times (early 19th Century) for those at sea.

And it is also the marvellous tool for showing off your subwoofer — if it’s up to the task. The first battle, near the start of the movie, is magnificent. The bass seems to contain plenty of infrasonic frequencies and is experienced by the body, rather than ear. It is DVDs like this that show the difference between real subwoofers and those little passive chipboard boxes that come with packaged systems, and that if they are lucky might deliver 50 hertz.

Oh, the surround’s brilliant too, with the creaking ship immersing the listener.