From Anaglyph to Frame Sequential 3D

[Update: Andrew Woods, a 3D expert from Curtin University in Western Australia, emails me with regard to this post:

Yes, an interesting and appealing thought.

It has been tried by many, but usually with mixed results.

Various methods have been developed and some work better than others but the better methods usually require lots of fine tuning so it’s not an automatic process, and certainly not a very simple process.

Oh well. Anyway, the post that prompted this remains here as a demonstration that I’m a pretty average prognosticator.]

Until recently, to the limited extent to which it has existed, 3D in the home has been based on ‘anaglyph stereoscopic‘ techniques. Which is to say, different coloured filters are placed before each eye (eg. cyan/magenta, blue/red) so that each eye sees a different image from the same frame. This works quite well in terms of producing a 3D effect, except that the resulting colours tend to be dull and washed out. Indeed, the reason that several different colour systems for 3D exist is because the 3D creators choose one that will best limit the damage done to colour.

Now what if a TV could take anaglyph 3D material and turn it into frame sequential 3D — the system now being rolled out in the form of Blu-ray 3D. Frame sequential 3D allows full colour because the left and right eye images are shown in sequence (LC shutter glasses are synchronised with the image display to ensure this).

One advantage of this would be to allow people to use the far more comfortable LC shutter glasses than the cardboard and cellophane ones packaged with the discs. Another would be to eliminate the visual distortion that the two colour schemes tend to induce in the viewer. With these glasses on, you get not just two different angles on the world, but two different colour schemes. This is tolerable in a darkened room where about the only thing you can see is the screen itself, but with the room lights on I find my eyes struggling to make sense of the same background things being two different colours at the same time through the glasses.

And here’s one more possibility: the system may be  able to restore some of the colour that is normally lost in the anaglyph process.

Let’s look at a special extra on the regular (2D) Blu-ray release of Monsters vs Aliens. The extra is an animated short called ‘BOB’s Big Break’, and this provided in both 2D and anaglyph 3D versions. The 3D version uses the ‘Trioscopic’ (magenta/green) anaglyph scheme.

Here is a frame from the 2D version (reduced in size, of course): 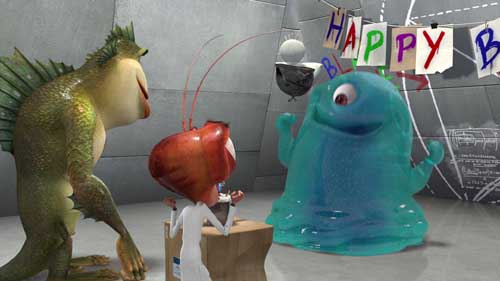 And here is the matching frame from the 3D version: 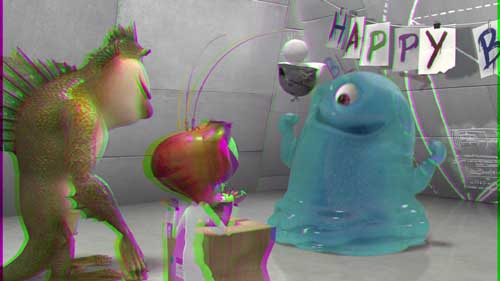 Now consider what the TV might do. It accepts the incoming 3D frame, it applies digital filters, subtracting from the frame first one (green) then the other (magenta) of the anaglyph scheme, creating two separate frames.

At this point it could simply show them sequentially, in synch with the shutter glasses, and you should get a result just like with the magenta/green glasses, except without the visual distortion.

Now let’s look again at the 2D and 3D versions of the frames. As you can see (ignoring the green and magenta ‘fringes’ in the 3D version), for the most part the colour treatments are quite similar. The major difference is the loss of red saturation (eg. in the ‘A’ and ‘Y’ of the sign).

What if the extracted colours could be shifted horizontally and then reinserted into the frames from which they were extracted? The shifting would involve some clever shape recognition because the amount of shift varies according to the object’s fore/aft virtual position. As you can see, the fringes around the cockroach (which is closer to the viewer on this virtual stage) are much wider than those of BOB (the blue character, which seems to be at a neutral point).

But TVs use variations on technologies like this already, such as in motion smoothing algorithms.

Will the next generation of 3D TVs include such processing? There are probably dozens of movies on DVD and Blu-ray with anaglyph 3D content, so this could be an attractive feature.