In celebration of the forthcoming release of Toy Story 3 on 17 November, I’ve put up my recent review of Toy Story 1 (& 2), along with a Blu-ray vs DVD comparison.

Of course the Blu-ray is markedly better than the DVD, but in general the DVD is pretty good itself. In general. I thought it worth highlighting one of the comparisons, though, where the DVD’s frame was pretty poor: 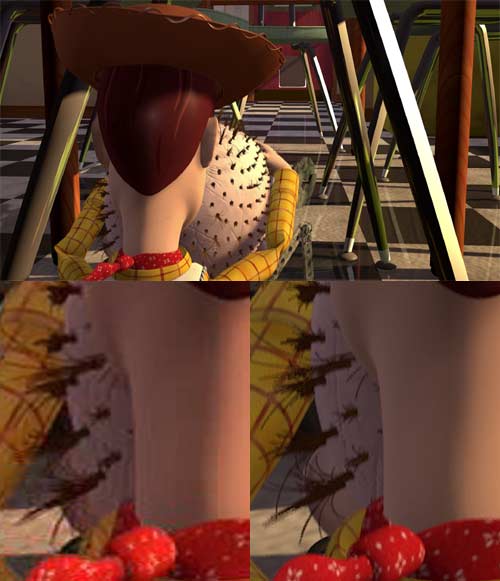 Now this whole scene has everything moving very fast, which imposes more demands on the compression system because compression by means of comparing frames loses its efficiency when the frames have relatively few similarities.

Normally you don’t see this level of degradation because fast movement means marked smearing as objects move within the open-shutter period of the camera. But this computer-generated scene is razor sharp and detailed despite the movement, thus allowing the artefacts produced by the DVD compression to be visible.

Anyway, there are another five comparison shots at the link.