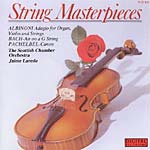 There is a little-known feature of CDs called emphasis. This is primarily a noise and distortion reduction mechanism, provided for when CDs were first designed over twenty years ago. In short, the idea is that the engineer boosts the treble before laying down the digital data, while the CD player cuts this back once again for a flat frequency response.

Now CDs that actually use this facility are exceedingly rare. I’ve just checked a hundred or so of my own, none of which used emphasis, until I finally remembered which one did: String Masterpieces (Innovative Music Productions, PCD 802). I while back I needed to copy a track from this onto CD-R, but the quality of the transfer bothered me immensely. It sounded very harsh indeed.

That high frequency boost reaches to more than 10dB! So why didn’t the CD player de-emphasise the treble? Because, silly me, I had digitally ripped the track and ripping copies the digital data as it is on the disc, ignoring the emphasis bit. Burn a new CD with the track and you get the high-treble-level of the music. Not nice.

This entry was posted in CD, Copyright. Bookmark the permalink.