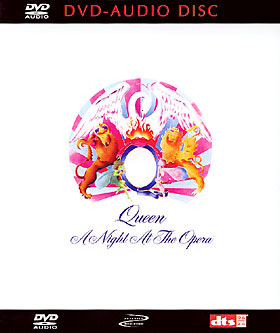 I have queried Warner Vision, the Australian distributor for the majority of DVD Audios, and DTS about the appearance of Bonus Groups. Now DTS has responded (Warner has told me that they are querying the US company for their titles). Here’s what DTS says:

Sorry for the delay in responding to your question.
Hopefully the answers will satisfy your curiosity regarding ‘bonus groups’.First, there is no DVD-A title A Day at the Races. You’re maybe refering to A Night At The Opera? [And, of course, DTS is entirely right. In my email I listed the wrong title. Silly me!]

Second, there is no bonus group code. Group 9 is used for some navigation controls.

Third, it might be an interesting idea to use such a bonus group in the future, but it has been found that hidden bonus elements are almost never discovered, so it is preferred that a bonus not be hidden.

Well that clarifies matters. In this case at least the ‘Bonus Group’ is there to act as holder for elements of the disc structure, which is something no-one ever need bother themselves with except for the unusually curious. Chances are this also applies to the Warner titles.

I must agree with DTS here that the use of Bonus Groups to hold material of interest to buyers would merely act to deny some, perhaps many, listeners access.

This entry was posted in Audio, DVD. Bookmark the permalink.