Before going DVD Audio, how about getting the recording right? 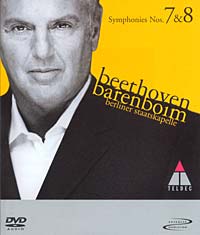 One of the beaut things about DVD Audio is the ability it has to carry six channels of sound at an incredibly high resolution of 96kHz sampling rate and 24 bits of detail. There is no recording format (and here I include SACD) that has the potential to capture the original signal with more accuracy than this (except, possibly, two channel DVD Audio using a 192kHz sampling rate). To get all this data onto the DVD and keep the bit rate down to specification, DVD Audio employs a new non-lossy compression system called MLP, for Meridian Lossless Packing.

But sometimes you have to wonder whether it’s worth it. Consider, for examply, a recent recording of Daniel Barenboim conducting the Berliner Staatskapelle in Beethoven’s 7th Symphony (Teldec 8573-83062-9 — the 8th Symphony is also on this DVD Audio).

This happens to be a superb performance, regardless of format. I had the opportunity to listen to all three formats: CD, Dolby Digital 5.0 and five channel MLP (the subwoofer channel is not used on this recording). All were obviously from the same source recording. The giveaway was as unsubtle as a spurious noise in all three recordings one minute into the 1st movement (possibly a microphone stand being kicked, although it has more the sense of a very brief electrical dropout).

In terms of which sounded the best, I had to give it to 96kHz, 24 bit MLP. This disc was recorded in five channel 96kHz 24 bit, so that is the way in which it ought to be heard. Both the MLP and Dolby Digital surround versions are sensibly encoded with nothing more than ambience in the surround channels. This is excellent. These channels remain inaudible to the ear as individual sound sources, but do add an extraordinary amount of stage depth to the performance.

The reason the MLP came up tops was that it provided a slightly smoother, cleaner and more coherent result than either the DD or CD versions. A breath from a member of the orchestra in the 2nd movement was clearly that, and precisely placed. In both the CD and Dolby Digital versions, the breath sounded as thought it might, perhaps, be a breath but I couldn’t be quite certain.

The CD took second place. The 1st violins sound a little edgier than the MLP version, and there was a lack of the airiness presented by both the MLP and Dolby Digital renditions. Dolby Digital came last, although not by much. It captured much the same air as the MLP, but lacked the fine detail available from the CD and MLP versions.

But I have to remark upon the mistake. An amazing mistake. An incredible mistake. In the first movement of the 7th Symphony, in all three versions, a clearly audible 11,140 hertz sine wave makes an appearance, accompanied by a much subtler 7,960 hertz tone, for a few seconds at around 9:30 in. This is decidedly irritating and I have no idea where it could have come from. But it’s there. Don’t believe me? Download this 15 second MP3 (230kB) snippet and listen for yourself. Note also the spectrum analysis. See those high frequency spikes?

I have to wonder how this could happen. Didn’t anyone from Teldec listen to the final product before signing off on it? I can understand such things slipping through on a budget CD, but on a DVD Audio, the main selling point of which is sound quality, this is unacceptable.

I must also comment on the discrimination against those with no more than a standard DVD player. While any deficiences in sound quality must be attributed to Dolby Digital, there really is no reason why a few of the user conveniences couldn’t have been included. The Dolby Digital version is not placed in the usual Title/Chapter heirarchy, so many DVD players find themselves without access to such facilities as on screen display. Further, there seems to be a User Operation Prohibition on the fast forward and rewind keys. If you want to skim back and repeat a section of the music, well … you can’t, and that’s all there is to it. You just have to go back to the start of the track and play it all the way through again.

This entry was posted in Audio, Rant. Bookmark the permalink.