The shape and colour of Se7en

On 2 December 2010 Roadshow Entertainment is releasing one of the truly great movies to Blu-ray: Se7en (aka Seven). That’t not just my opinion. IMDB has it listed at #28 on user ratings.

For ten years David Fincher had been directing music videos, apart from one perhaps inauspicious aside doing Alien 3. Then he did Se7en. It did a hundred million dollars at the box office, and turned Brad Pitt from a fast rising star (his salary was $4 million, apparently) to a superstar, and started Fincher’s real career. He followed it with it with six movies, so far, which all range from very good to superb, including Fight Club and, most recently, The Social Network.

Obviously I’ll be doing a formal review of Se7en in due course, and a Blu-ray vs DVD comparison in a few days, but there was one interesting thing that emerged when I was ripping frames for the comparison.

The Blu-ray has essentially the same special extras package as the two disc DVD version, including the three part featurette called ‘Mastering for Home Theatre’. All the extras are presented in 480i60 format.

This featurette is about how in preparing the movie for DVD the sound was carefully remixed to optimise it for the home theatre experience, and some careful colour balancing and modest reframing was performed. Stuff, basically, that they couldn’t do for the theatrical release, but could do digitally in preparation for DVD.

So we have the same featurette on both the DVD and Blu-ray. Here’s the same frame from both versions of the movie itself (DVD top, Blu-ray bottom): 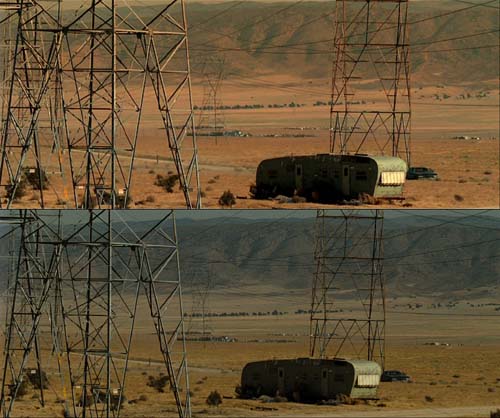 In my Blu-ray vs DVD comparisons I caution that not much attention should be paid to colour and brightness differences because I use different applications to extract the frames. But nonetheless, it is usual that the colour balance taken from the same frames with recent movies are virtually identical, except sometimes for full-on red being a touch brighter for one. What we see above is a very different colour balance on the source.

These are consistent throughout, in the sense that there is always slightly different framing (some frames are even rotated slightly with respect to each other) and clear colour balance differences, but the differences in both vary over the length of the  movie.

And the Blu-ray choices are clearly superior. The thing looks lovely.

But there must have been some more work done after the DVD release, which hasn’t been mentioned in the Blu-ray special extras.

This entry was posted in Blu-ray, DVD, Video. Bookmark the permalink.

1 Response to The shape and colour of Se7en