A couple of posts ago I mentioned that the Universal Pictures (Australasia) Pty Ltd Blu-ray release of First Blood had an identical video encode to the previous HD DVD release. I have now checked both Total Recall and Serenity, which Universal had also sent me. Total Recall, as can be seen here, is also identical to the earlier HD DVD. I confirmed that by comparing 737 ‘I’ frames from each and finding them bit-perfect matches.

Serenity, though, is very different. I shall write it up in due course in the appropriate place. Here, though, I will mention that besides the obvious differences (the Blu-ray has two PIP functions, for example), when I extracted frames and compared them, they were quite different. The ‘I’ frames were even in different places for the most part.

The extraction of frames from the HD DVD version fell over after only the first one hundred ‘I’ frames. I don’t know why. So I had a limited number of chances to find matching frames between the HD DVD and Blu-ray versions. But I did manage to find one. Here it is, shrunk down: 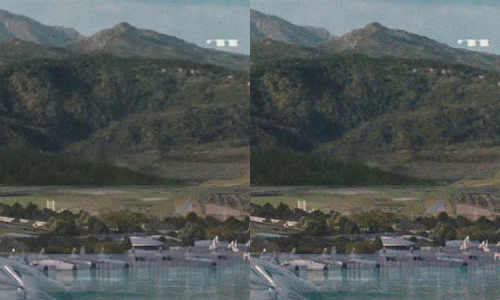 The differences are there, but by no means obvious. In fact, I chose this section because it was with the forested hills that the differences were most marked. If you examine them closely, you will see that the dark parts are a little darker on the Blu-ray, and the detail a bit clearer. It’s as though a fine veil or haze overlays the HD DVD version. But an almost transparent one, just enough to knock the edge of clarity off.

I expect to have more up under the review in a few days.

This entry was posted in Blu-ray, Disc details, HD DVD. Bookmark the permalink.