Do you have a recent full HD Samsung TV?

If so, can you do me a favour? A number of Samsung TVs I’ve reviewed lately are unable to apply the ‘Screen Fit’ aspect ratio to HDTV. But that might be due to all the 1080i stations in Canberra broadcasting at 1,440 x 1,080. I understand that stations such as One, GEM and the 7 HD one (it’s called something different here) in the major capitals — Sydney and Melbourne — broadcast at 1,920 x 1,080. 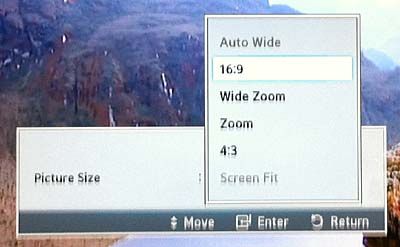 If you have a recent full HD Samsung TV and live somewhere other than Canberra, would you be able to see if ‘Screen Fit’ is available on those stations? The procedure is simple: Menu|Picture|(scroll down)|Screen Adjustment. Select Picture Size and a list should be presented. ‘Screen Fit’ will either be available or greyed out.

I’d love to hear from readers if ‘Screen Fit’ is available for them. Could you advise which model of Samsung that you’re using

, which TV station and which city you’re in. Just leave a comment, thanks.

Incidentally, I suggest checking using this procedure rather than just stabbing the ‘P.SIZE’ key on the remote because with some models the latter doesn’t present a list but just cycles through the available settings.

This entry was posted in Equipment, Testing. Bookmark the permalink.