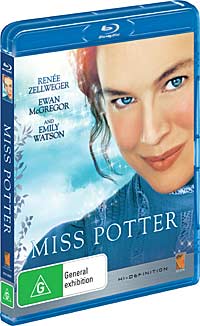 Lately I have been devoting my website attentions more to my Blu-ray vs DVD comparison shots than I have to this Blog. Most of them haven’t really been worth commenting on individually here, but now an unusual one has arisen.

Miss Potter is a British produced biopic about the childrens’ book author. Icon Film Distribution kindly sent me a copy of both the DVD and the Blu-ray release. I promptly set about entering their specifications into my database. The theatrical showing of the movie had, according to IMDB, a run time of 92 minutes. As expected, the DVD had a run time of nearly 89 minutes.

The shorter run time is that as with most PAL DVDs, the film frames were transferred one for one to the DVD frames. Since PAL DVD runs at 25 frames per second, the film plays a little faster. About 4% in fact.

Since Blu-ray movies are played back at 24 frames per second, their run times should be the same as the theatrical showing. But on Blu-ray, this movie was also nearly 89 minutes long. It took a while for the penny to drop. Eventually I realised that I now had in my collection the first Blu-ray movie I had seen which was not recorded at 1080p24, but at 1080p25. Why Icon would do this I have no idea. But it is nice to see something unusual. In addition, the special extras use the Australian standard definition resolution of 576i.

This entry was posted in Blu-ray, DVD, Interlacing. Bookmark the permalink.