Week before last Samsung did its 2013 TV launch. Included was its 85 inch 4K model, which it’s treating like a super custom install. They’re produced to order, you get free ‘Evolution’ upgrades for a few years and a tech to install it. Price: $40,000. Real Rolls Royce stuff there.

But what’s that ‘Evolution’ thing? Well, since last year, Samsung has offered on some of its TV models ‘Evolution’ upgrades. That is, there’s a section at the back in which a module can be placed that upgrades all the ‘Smart TV’ stuff, including the processor. This year gets quad core, so whack the $299 Evolution upgrade in and you have 90% of this year’s model. The styling is unaltered, but you get the full suite of network stuff with the new layout, the new support for voice commands, and some part of the motion capture control system (the built-in camera on last year’s TV is lower resolution than the new one, so the full performance of the new model can’t be expected).

That’s where things got spooky at the launch.

I was wandering around the various models and exhibits on display, enjoying a beer and snacks courtesy of Samsung, when something very strange caught my eye. It was on one of two 2012 Samsung 55ES8000 TVs (the company’s then top of the line models). The left hand one was as delivered last year, while the right hand one had the Evolution module installed, showing how the TV was now almost the same as the new model.

Here’s the old TV with the upgrade module: 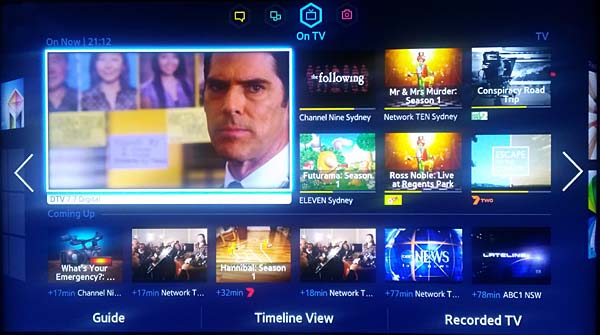 As you can see, this is a clear reorganisation of the old one, shown here: 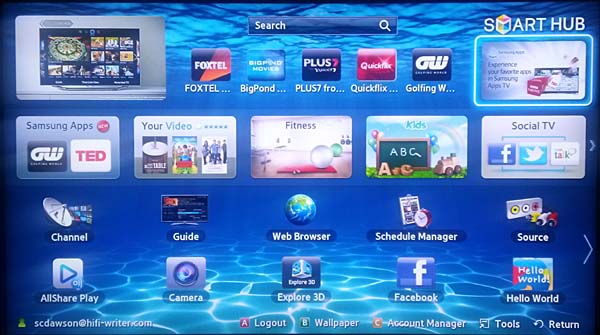 So what was spooky? Look at the bottom left of the picture immediately above

Hmmm. I must admit there was a moment of confusion. Strange thoughts fluttered through my mind. Had the TV scanned its environment and somehow found my phone? What was going on?

Fortunately the obvious explanation soon came to me.

This must have been the specific TV I reviewed last year. When you’re using the Smart TV stuff you have to create a user ID which is normally keyed to your email address

, as is so often the user ID deployed these days. It seems that the TV had never been reset since that review.

I know, I should have done it myself. But up until now I’ve had a general policy of not resetting TVs. The reason is that some years ago an equipment distributor queried whether or not I had actually reviewed their product. The reason for that was because I pack these things up with considerable care. The stuff I review is worthy of respect. Apparently in this case it was with so much care that they suspected that I’d never taken it from the box.

So I like to leave TVs tuned to the Canberra TV stations as evidence that, yes, I have actually used them. But I may have to do a factory reset henceforth, just in case someone else is able to use my login details to draw on an online media account to which I subscribe.

This entry was posted in Equipment, Firmware, Fun. Bookmark the permalink.