Have you ever wondered how they get the sound so loud in cinemas, not to mention rock concerts?

It isn’t by applying lots of power, although that helps. Mostly it is by using highly efficient loudspeakers. That is, loudspeakers that convert a significant proportion of the incoming electrical energy into acoustical energy.

That, as it happens, is something that is quite difficult to do. 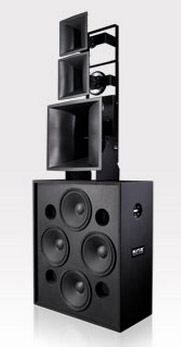 Consider an average high quality high fidelity loudspeaker. You can probably argue with this

, but I’d guess that the average sensitivity is 89dBSPL output for 2.83 volts input, measured at one metre. (Why 2.83 volts? That’s the voltage required for one watt of power into an eight ohm load.)

So how efficient is that in conventional terms? Brace yourself: that is 0.5% efficient. In other words, if your loudspeakers are typical, 99.5% of the power you pump into them is converted to heat in the loudspeaker, with just a smidgeon left over to produce actual sound.

The logarithmic maths involved is far from linear. A typical sensitivity for speakers with a home theatre in a box system from a Japanese or Korean maker will be around 84dBSPL. That comes to an efficiency of just 0.16%.

A home theatre or hifi loudspeaker designed with an emphasis on efficiency can often be much higher. Typically they top out around 95dB, which is 2% efficient. Truly a terrible figure, but far less so than the normal one.

Just think: if you have a powerful, high quality system and you play your music loud, you might hit 110dB peaks from time to time. With these speakers in your room, you’d manage that with just a watt and a bit of input.

For the record, a theoretical 100% efficient loudspeaker would have a sensitivity specification of 112dBSPL for 2.83 volts, measured at one metre.

This entry was posted in Audio. Bookmark the permalink.