Blu-ray and HD DVD the same … more or less

It used to amuse me when people would pronouce Blu-ray to be the ‘better’ format than HD DVD, or vice versa, on picture quality grounds. Potentially BD could be better simply because it had more space available. Kind of. Possibly.

Even that wasn’t really correct.

Virtually all HD DVDs were dual layer, and thus had a capacity of 30GB. Nearly all the very early Blu-ray releases were single layer (25GB). Toshiba announced fairly early on a move to triple layer HD DVDs. They claimed that firmware upgrades would make players compatible with these. The importance of being able to claim the larger endowment was suggested by the fact that instead of being 45GB, as you’d expect (15GB per layer), the triple layer HD DVDs were to be 51GB, or slightly larger than a dual layer BD. Nyah, nyah, nyah, nyah, nyaaaahhhh!

But meanwhile, back in the real world, film companies like Warner Bros which had decided to issue in both formats typically went for the same encode where possible (although often with fewer sound formats or features on the Blu-ray, due, I suspect, to less capable early authoring software, and the lack of early consumer players capable of fully using these additional sound formats and features). 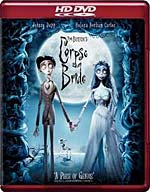 But since both HD DVD and Blu-ray supported the same video formats, you would not expect there to be any differences between the two. The only actual differences ought to be due to the differences in the players used to watch them. That’s the theory. Let us examine two actual discs from Warner Bros, both containing the same movie: Corpse Bride. What do we find?

Both present their content at 1080p24 using the VC1 codec.

At face value, it seems likely they’d be the same. The size differences could be due to different overheads between the two formats. So let’s delve a little deeper.

I sampled the first twenty minutes of both versions of the movies, extracting the ‘I’ or ‘anchor’ frames to PNG format image files. These were identically located (ie. the I frames were at the same position in both the Blu-ray and HD DVD video steams). In each case the matching files had an identical files size, down to the last byte. So I selected three of the matching PNG files and did a byte-by-byte file comparison (using the DOS command FC /b) between the HD DVD and BD versions. Both were absolutely identical in every way.

All this is mostly for academic interest, now that HD DVD is dead. But it does act as yet another warning against the perils of a blanket declaration that technology A is better than technology B on the basis of subjective impressions of quality.