Posted on November 2, 2009 by Stephen Dawson

Some months ago Scott Fitzgerald, the Gadget Guy’s Web Master, mentioned to me a ‘jarring “dual quality” of image’ on this wonderful two disc Blu-ray release of the 1995 TV mini-series version of Pride and Prejudice.

It’s taken me awhile to get around to watching this wonderful version. It has been many years (I last saw it on VHS). The video quality was a little variable, but not grossly so for the most part. There was some fine detail instability on exterior building shots, and a very occasional soft focus, but none that several strained my levels of tolerance.

Until the very end of the final episode. At 43:33 a tracking shot commences that lasts until a fade cut at 45:10, and this rather long shot is so noticably inferior to all that has been before (and all that comes after) as to be quite distracting. It’s almost as though the producers simply forgot to restore this section of the footage.

So what we have is Miss Elizabeth Bennett and Mr Darcy walking along a country lane, so: 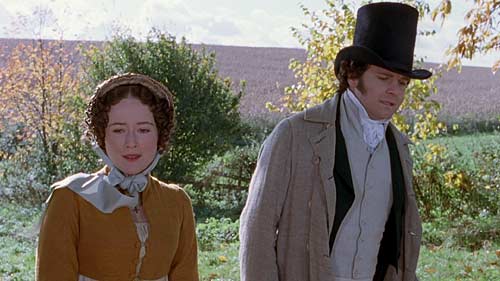 It cuts to a couple of closeups of the principals in turn, so: 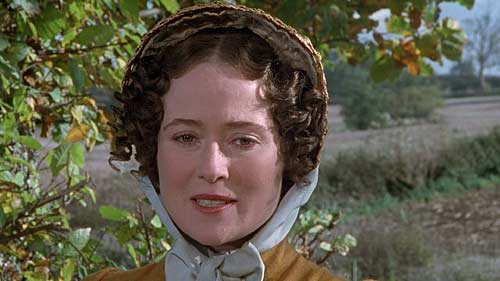 And then, at 43:33, goes back to the tracking shot, although from a different angle, and suddenly very soft in focus and low in contrast, so: 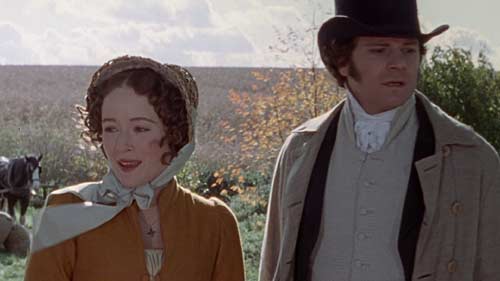 To really see the difference in quality in this last shot, let’s put an unscaled detail from the first shot above side by side (to the left) with one from the last shot: 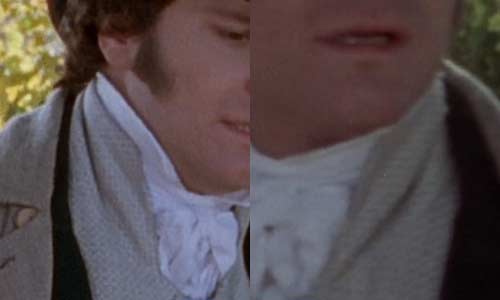 Let’s do it again: 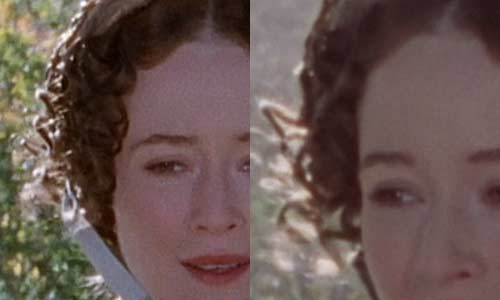 Believe me, on the big screen Scott’s word — ‘jarring’ — is very appropriate.

But don’t let that put you off. This is a glorious show, and the picture is far better (for the most part) than it has any right to be for a 1990s made for TV show.