Easy, or not, on the eyes

I haven’t actually been doing entirely nothing lately. Truly! In fact I’ve been adding some more Blu-ray reviews, and in their absence some DVD vs Blu-ray comparisons. Check them out. What follows here is an extended discussion regarding the picture quality of the Warner Bros Blu-ray of Deliverance, which I’ve lifted from the screen shot comparison.

I only gave the Blu-ray 3.5 stars out of five for picture quality. Here is why: 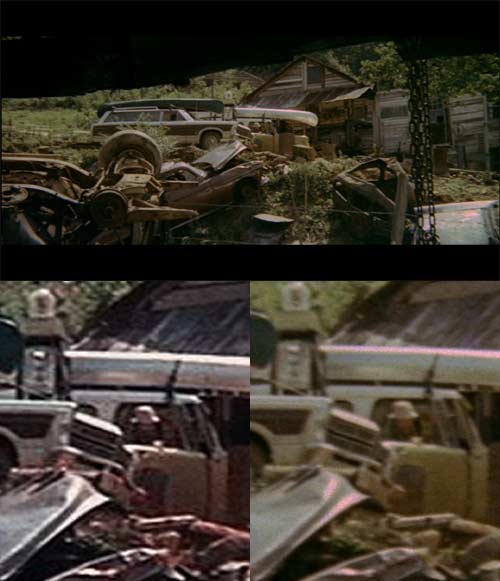 What do we see here? At first glance, the picture seems softer than the PAL DVD. So much so that perhaps it would be better to choose the DVD!

But let’s look a bit closer. Underneath the fuzziness of the Blu-ray plicture there is, in fact, more detail. Look at the face of the man under the hat. There is a least a hint of a normally shaped face in the Blu-ray, whereas the DVD just has a narrow horizontal band in a skin tone colour. Look at the upright divider in the grill of the car, visible only on the Blu-ray.

Fact is, the DVD is full of apparent detail which isn’t really there at all. It’s illusory detail, and is generated artificially. My guess is that the DVD image was ‘sharpened’ prior to encoding. This process typically involves enhancing contrast differences. It makes the image easier on the eye in one way, because it has more clearly defined edges to latch onto (if the picture is fuzzy, your vision mechanisms assume that your eye isn’t properly focused and try to correct this, futilely and tiringly).

Nonetheless, it is a lie because much of the apparent detail simply is not there in reality. Look at the mottled surface of the metal canoe on the more distant car’s roof. This is simply subtle variations enhanced and made disturbing by means of the sharpening. And so it goes for every other part of the picture.

To illustrate, below I have applied a great dollop of sharpening (100%, Radius 6.6 pixels) in Photoshop to the right hand part of the picture. Now this Blu-ray source looks a lot more similar to the DVD, even though I operated on the high definition source.

Having said all that, it is clear that different prints of the film were used for the Blu-ray and DVD versions, and I suspect that the print used for the DVD version may have actually been sharper and held more detail than the print used for the Blu-ray version. Here and there in the former there are bits of detail that are absent in the latter which do not appear to be artificially generated lies, but actual original content. For example, compare the rear view mirror attached to the door on the car at the rear, the one from which the man is emerging. This is clearly better defined on the DVD, especially where it attaches to the door. 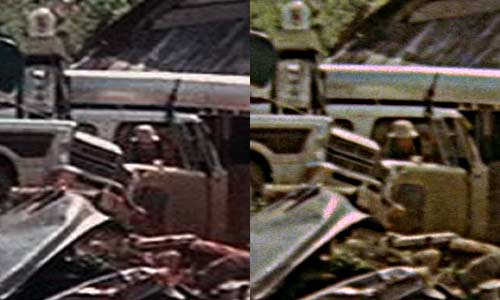