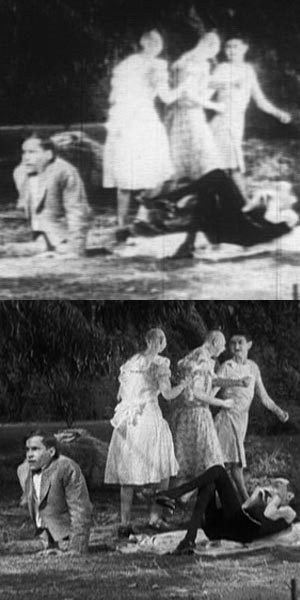 Of the two DVDs, one is from Siren Visual Entertainment (the top one in the picture to the right) while the other is a remastered version from Warner Bros. There’s no need to actually make any remarks on the quality differences. The pictures tell it all.

As for the movie itself, here is an extract from my review which appeared in Australian HI-FI in late 2005:

When I was a student in the 70s, the Sydney University Students Union used to run lunchtime screenings of movies weekly. Since students then were even more radical than now, they sought the confronting and subversive. Thus was my first exposure to Tod Browning’s Freaks…. 1932’s Freaks marked the beginning of the end of [Browning’s] career. The movie was a flop in the US, promptly banned in Britain and, of course, Australia, for its disturbing content, and remained banned until at least the 1960s here. Thus the student showing.

How times change. The current DVD carries a PG rating with the semi-explanation ‘Mature Themes’, which means ‘we can’t think of anything else to justify denying a G rating’.

So why all the controversy?

This is basically a poorly plotted, uninvolving horror story set in a circus (to be fair, some 30 minutes were apparently cut at the studio’s insistence). The notoriety derives almost entirely from the actors. A couple of them are ‘normal’, but the rest are the titular ‘freaks’. There’s the human skeleton, who looks like he’s just emerged from a concentration camp, and several microcephalics (called ‘pin heads’), and those of diminished stature, and some without various limbs. Johnny Eck [at the left in the screen shots], who was born with no legs, showed an ability to get around on his hands that would later take him to the top of the Washington Monument.

Tod Browning had run away from home when he was 16 to work at a circus, so to him these people were probably familiar. But to see them on the screen shocked delicate middle class sensibilities. Even though the sentiment of the movie is clearly on the ‘freaks’ side.

Or perhaps it was the the romantic interest of the dwarf Fritz (Harry Earles) in the beautiful Cleopatra (Olga Baclanova) who, in the end, is punished rather grotesquely for her exploitation of him.

Incidentally, I don’t want to appear to be criticising Siren for the quality of its DVD. The fact is, this was available back in February 2004, while the Warner Bros edition didn’t appear until late that year. Even if the transfer is dreadful, as this one is, it is far better than not having one at all. Clearly Siren only had access to a degraded film. But at least it wasn’t a transfer from an NTSC video tape, as so many cheap DVDs appear to be. And Siren didn’t skimp on the transfer, applying an extremely high average bit rate of 7.98Mbps (the Warner Bros version manages with 5.77Mbps).

So thank goodness for the likes of Siren and Force Video who make movies available that may otherwise never be seen.