Should you wait for the right DVD? 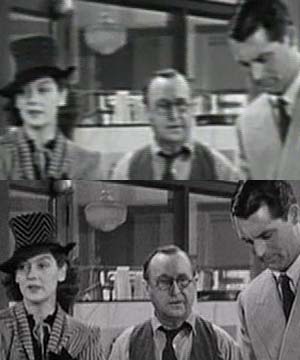 I have previously made reference (Frankenstein and Metropolis) to cheap and nasty, and good quality, DVD releases. The other day I bought one of the latter to replace yet another of the former.

In this case it was His Girl Friday, a hilarious 1940 gabfest. The picture to the right shows the same frame grabbed from two different DVDs. The top one is from the Australian Rajon Vision release (under the branding ‘Saturday Night at the Movies’). The bottom is from the Columbia Classics release. The differences need hardly be pointed out. Even the grey-scale in the Columbia release is more neutral than the other. As for sharpness, well …

I should also note that while both are in PAL format, the Columbia Classics version has been freshly telecined for PAL, whereas the Rajon version seems to be a conversion to PAL from an NTSC source. Most of the frames show heavy interlacing, and the Rajon version is a few minutes longer (NTSC runs at the same speed as film, PAL 4% faster). For this demonstration, I actually picked a non-interlaced frame.

Zooming in on the Rajon version shows tiny skewed scan lines at many edges. This suggests to me that the source for the Rajon release was actually an NTSC VHS tape!

Oh, and the dialogue clarity (vital for a movie such as this) is hugely improved on the Columbia release.

So should you happen across a cheap DVD of a classic movie, should you buy it? Or wait until an original studio release comes out? Oh buy it of course! There is no guarantee a higher quality version will ever emerge!

This entry was posted in Cinema, Disc details, DVD. Bookmark the permalink.