The History of the Internet according to, ahem, me 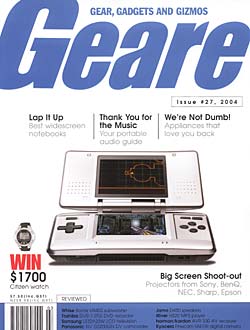 For some years I’ve been writing for the magazine Geare, usually just reviews of the assorted bits and pieces that I review. I was always a bit ambivalent about it because Geare is one of those ‘guys’ magazines, in which everything purported to be of interest to men was gathered within its pages — cars, home entertainment, cameras, motorbikes … and girls. There was always a multi-page spread of some attractive young lady, scantily dressed, with just a, er, fig-leaf of relevance in the form of a product list on each page (watch by so-and-so Swiss watch-making firm, G-string by such-and-such).

Getting rid of the girl has had another effect, even more pleasing to me. Namely, Geare is now commissioning more stuff from me. So the new issue — #27, 2004, which should be on the newsagency shelves across Australia and New Zealand any day now — has my ‘Know it all’ column in its usual garish yellow (all about DLP projectors), and my history of the Internet. Go get it.

This entry was posted in Computer, How Things Work. Bookmark the permalink.