The misuse of widescreen displays 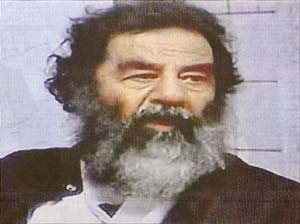 What I keep seeing is fat faces.

First, I must accept that discussing the issue in this entry in this context is probably inappropriate given the gravity of what has been achieved by the Coalition Provision Authority in Iraq with the capture of Saddam Hussein. I had a tear in my eye with the joy of the moment as I was watching the press conference last night in which the announcement was made. But the fact that these pictures are, more likely than just about any other, to be seen internationally make them a fitting example of this widespread (and, in the great scheme of things, trivial) problem.

The problem is that once some people have a widescreen display (ie. with an aspect ratio of 16:9 instead of the standard 4:3), they seem to live in fear of ever having black bars down the sides of the picture. Instead, they leave the display in 16:9 mode, stretching material recorded in 4:3 mode sideways. 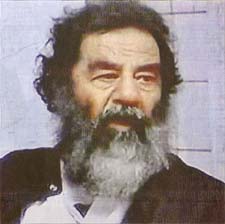 In those welcome, and pleasingly demeaning, shots of Hussein shown on plasma displays in the press conference, this attitude was in clear evidence. It was obvious that the video footage of the butcher was shot using a 4:3 aspect video camera. But the widescreen plasma displays were left set to widescreen mode, so Hussein’s whole image was distorted sideways, stretched by 33% horizontally.

The first picture here shows my scan of the picture from the front page of today’s The Canberra Times, and no doubt similar shots appear on front pages around the world. This is a straight screen capture from the video feed, seemingly not changed in any way other than being cropped at the edges.

The second picture here shows the same scan, but reduced in horizontal scale by 25% to adjust for the 4:3 to 16:9 widening to which the original picture was subject.

Now, I ask you, which one looks more like Hussein?

What is interesting is that the distorted image is still recognisably Hussein. The image processing and facial recognition circuitry in the human brain is truly an amazing thing.

This entry was posted in Imperfect perception, Video. Bookmark the permalink.