Is This Really It?

In a comment to an earlier post, Craig makes some astute observations about the insertion of apparent SD material into Michael Jackson’s This Is It. I have now belatedly watched the movie and have been trying to work out what was going on with these segments.

The first thing was to confirm whether these are actually SD. I grabbed a stack (ie, nearly 8,000) frames from the movie and checked out a few. Here is an example of one of these frames: 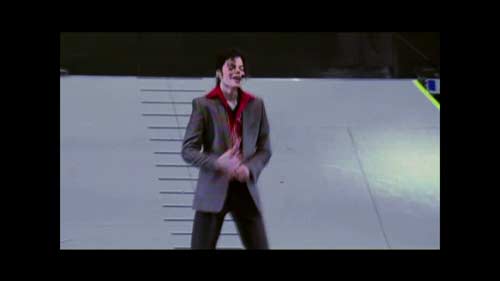 A natural way of inserting SD into a frame like this would suggest a picture height of 480 pixels (assuming US style SD). The actual size of the picture part of these frames is 1,458 by 836 pixels. So if SD, it was scaled up. 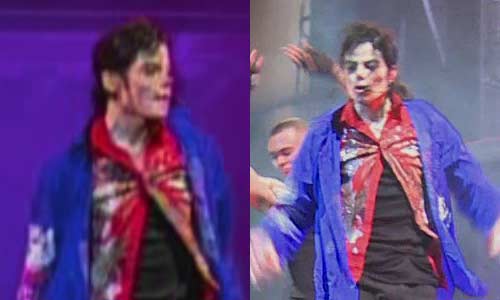 To my eye, the low res stuff looks SD, or worse (perhaps because I am used to PAL as SD). It has been scaled up, but wisely not to the full size of the frame.

I attempted to estimate the actual resolution of the source by checking jaggies. These appear irregularly, and I’ll talk about a variation on these in a moment. But I was looking for black and white jaggies primarily because these avoid issues of the lower resolution colour signals. I found this frame with a jagged diagonal (others nearby have smooth slopes): 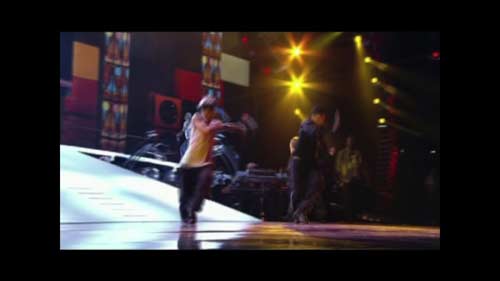 Here is the bottom of the white ramp to the right of dancer, unscaled by me this time:

I measured the height of ten of those jaggies, and they yielded an average height of 4.6 pixels. Dividing that into the picture height of 836 pixels suggested that about 181 jaggies would fit into the full height of the picture. But the reason these jaggies are here is most like because, for some reason that isn’t clear, this particular frame was deinterlaced poorly, leading to a two-scan-line tall step pattern. This interfered with the scaling up in resolution of the picture to a smooth result. So that would suggest that there were 2 times 181 scan lines or vertical pixels in the source: about 362 pixels.

Since most camcorders default to 4:3 aspect ratio, my guess would be that the source was letterboxed into a widescreen format.

Remember the picture width I mentioned earlier? That was 1,458 pixels. Multiply that by three and divide by four and you get 1,093, which would have been the relative height of the full 4:3 picture, compared to the actual 836 that we have. Take our presumed 362 pixel picture height, multiply by 1,093 and divide by 836 and we get 473 pixels tall for the original source. Which, in my book given the uncertainties of my measurements, is close enough to 480 pixels, or US-style standard definition.

Now, was the output via composite video? Or some other analogue format? Or digital?

Certainly, by comparison with the high res stuff, it is extremely soft and lacks contrast, but that could be simply because it comes from inexpensive camcorders. Here’s a detail from a frame that suggests that the output was via composite video:

The rainbow pattern appears on Jackson’s jacket, which the HD portions reveal to have a fine herringbone pattern. The production of rainbow artefacts is a common byproduct of composite video, due to cross interference between the luminance and chroma portions of the mixed signal in composite video. That would suggest composite, but there are other possibilities.

Another strong marker of composite video is what I call ‘dot crawl’ around strong colour boundaries. This consists of dots of noise swirling in a semi-random way very close to those boundaries. The SD sections in this movie don’t seem to have this as far as I could see. But ‘dot crawl’ is more easily controlled than rainbow artefacts by the use of high quality comb filtering (to better extract clean chroma and luminence from the signal).

Some other defects in the picture can be misinterpreted as dot crawl. For example, let’s look at the top right corner of this frame: 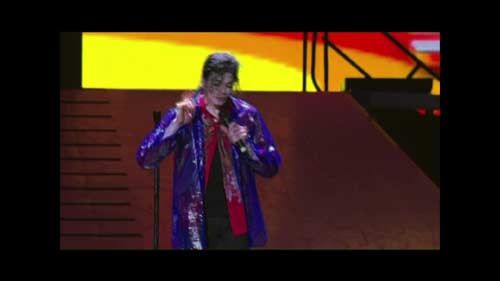 Here is that section of the picture unscaled:

You can see that the black diagonal seems smooth against the yellow background, but jaggie against the red. That is due to the low resolution of the red in the signal, which hasn’t been scaled up smoothly for presentation in this format.

So whether it is composite is not absolutely certain, but it is still very different and inferior to the HD material.

Still, given the unexpected need to use whatever was available to produce this movie, the SD allows the addition of different angles in fast cuts to provide a fairly professional result. I suspect that the producers consider the SD element a feature rather than a bug.

1 Response to Is This Really It?