The other day I noted that the Blu-ray of Michael Jackson’s This Is It has some trailers hidden on the disc, apparently inaccessible via the play menu.

Well today I discovered that there are zombies hidden on another Blu-ray disc. The disc is Zombieland, another Sony Pictures release. In addition to a decent collection of official special extras, plus the usual Sony 7669 test patterns from the main menu, there are eight files not apparently linked to by anything on the disc. These amount to a little over 23 minutes of full 1080p24 HD sitting on the disc, essentially inaccessible to most.

So what are these zombies? These are eight extremely slow motion clips that seem to be basically raw (ie. not colour or contrast adjusted). Here’s a shot from one: 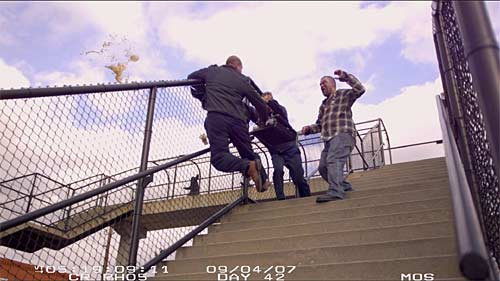 That splash to the left and above the railing is the falling man’s coffee cup going flying. This really is super slow motion. I’d say at least 10:1 and probably more.

Here are descriptions of the file contents:

Here’s the Zombie being punched in 05017.m2ts. The splash of blood shows how quick the shutter speed was: 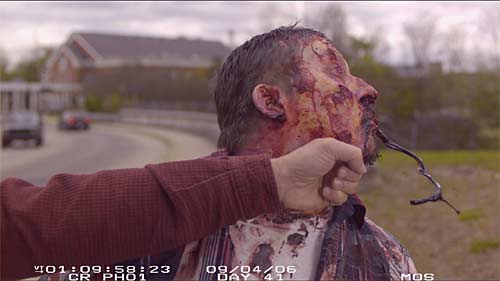