I’m working up a Blu-ray vs DVD comparison for the 2005 version of Pride & Prejudice and noticed something interesting. [Update: the comparison is here.]

Virtually all widescreen Blu-ray discs have, in my experience, conformed to a convention where the picture uses the entire left/right width of the frame. In other words, the left edge of the picture starts in the left-most vertical  row of pixels, and then stretches across all the way to the other side. DVDs sometimes had this, but many actually had narrow black bars down the left and right side of the picture.

Why did they have this with DVDs? 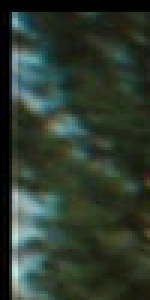 My guess is that this was to allow more of the picture to be seen. When DVDs were introduced, virtually all displays were CRT, and virtually all had significant overscan.

The picture geometry in CRTs was never fixed. It could vary over time as the picture tube aged. I still remember visiting my grandmother as a child on Sunday evenings, tuning in ‘Lost in Space‘, and noticing that all the characters had short legs.

Sometimes enormous amounts of the picture was lost from the edges.

By the time Blu-ray was appearing, panel TVs were becoming the norm, and many of these had the ability to banish overscan completely. In any case, the overscan they did impose was relatively modest: typically 2% or so. They could do this because the geometry of panel TVs doesn’t waver over time, being digitally mapped onto a fixed grid of display elements.

So back to Pride & Prejudice. Oddly, this movie uses only 1914 pixels of the picture width, with four pixels of black on the left, and two on the right. One consequence of this is the picture shown here, above right. This is from one frame of this disc (a similar effect is apparent on all the frames I checked). I’ve blown this up to 300% of original size to make it easier to see. Basically, there is kind of a negative ghost at the edge of the picture.

It looks a bit like edge enhancement, but I doubt that it is. There isn’t any other apparent edge enhancement in the movie (that I’ve seen so far). I suspect it’s an artefact of the compression system, but I’m not sure why. This movie has a very healthy average bitrate of 30.6Mbps using the VC1 codec. While the black bar seems to have interfered with the two pixels of the picture to its immediate right, the reverse has also been true. It isn’t obvious from the picture, but the right-most column of black pixels is actually a little lighter than the three to its left (they are all at ‘zero’ luminance).