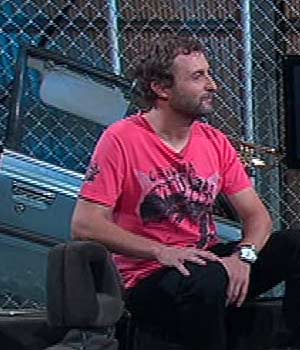 The Australian version of the BBC TV show Top Gear is growing on me. Unfortunately, it copies the original so slavishly that this extends to some of the more horrible photographic choices. In particular, it follows a practice about which I earlier wrote in ‘Insane artistic choices‘. It uses — sometimes, and not consistently — a picture processing technique of drop field deinterlacing. That is, the second field is simply omitted, and replaced by a repeat of the first field. This has the intended effect of adding a slight film-like jerkiness to motion. It has the unpleasant side effect (I’m assuming that this isn’t actually desired!) of reducing the vertical resolution by half. Instead of getting 576 lines, you are only betting 288.

The shot to the right is from a segment within the studio, where there isn’t even the excuse of motion. Note all the jaggies. Note, also, that I have not retouched this in any significant way. I grabbed a frame digitally from the video stream and saved it. I cropped the picture in Photoshop to the size you see, and then recompressed it into JPEG. The re-compressed image is indistiguishable to the eye from the original.

I have not scaled or deinterlaced this in any way. This was a section of the picture actually broadcast on Australian TV in 2009!