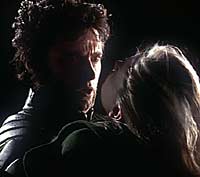 I’ve just been examining the structure of the Region 2/4 X-Men Limited Edition DVD. Several things stood out. The movie itself resides in Title 2 (there are 42 Titles!), and also in Titles 1 and 3. Title 3 is the branching version which adds in about ten minutes of deleted scenes, while Title 1 is generally inaccessible. Now Title 1 has the whole movie, just like Title 2, but tacked on the end are five more Chapters, which in order replicate Chapters 5, 6, 7, 8 and 11. Weird.

Also of note is the low bit rate of the movie itself. Sure, it looks good, but how much better would it be if the bite rate were bumped up from 4.68Mbps (which includes the 384kbps audio)? Especially as the whole disc has just 7.1GB of data (you can have up to 8.5 on a dual layer DVD).

There are also two easter eggs. There are seven preliminary character drawings, accessible by selecting Wolverine’s dog tag on the Art Gallery menu, and a 35 second spoof in Title 15, where Spider Man walks in on a scene. You get at this one by selecting the Knight drawing on the Trailers menu.