Does Creative have an iPod killer at last? 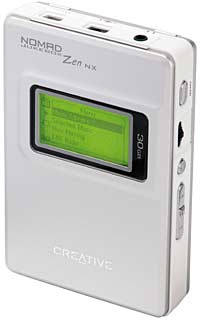 Well, the price is right. Creative’s Nomad Jukebox Zen needs to shorten its name to match its price, to really kill the Apple iPod. What’s wrong with just the plain old Creative Zen? And without iPod’s beaut non-moving control wheel on the front, navigation will never be as easy.

I haven’t reviewed the Zen yet, although I’ve done a couple of versions of the CD player-sized Jukebox. These have worked rather nicely and have the added advantage of PCM recording (something missing, I think, from the Zen). Still, if you want to record, might as well get a proper recorder.

Creative’s software is a bit off-putting. Monstrously large and, during one of my reviews, rather clunky. Still, the nice thing about hard-disk based MP3 players is that you generally only need to load each song once, and then it stays there forever.

Most MP3 players still rely on good old USB 1.x, which just can’t cut it against the iPod’s FireWire. Last time I reviewed the Jukebox, the file transfer time on a 128kbps MP3 was four per cent of the track playback time. For the iPod, it was just 0.34% or, say eight-tenths of a second for a typical four minute track. The USB 2.0 offered by the Zen ought to come very close indeed. I’ll have get one and check it out.