My Blu-ray disc data gathering project continues, in which I try to determine as many technical and standards details as possible about Blu-ray discs. Of the nearly 300 Blu-ray discs in my database, 98 now have a ‘Completion’ score of ’12’, the highest I presently give. With DVDs the highest score I gave was ‘5’, which shows how much more complicated BDs are.

To get ’12’, my database record identifies — by my own exploration — amongst the more common stuff things like region code, size of the disc, the number of layers, the Titles on the disc, the special features, the video and audio formats of the main feature, and the video and audio formats of every identifiable special extra on the disc. Oh, and the *.m2ts file names for each title, and the audio and video bitrates.

That can be quite a bit of work.

I am presently going back over the database entries I have with a score of ‘8’ (these lack the items mentioned in the last sentence of the list above) and promoting them by running them through BDInfo. Brilliant tool! Right now I am working on The Simpsons Movie. It has some interesting characteristics.

Those familiar with the disc will know that there are two ways of playing it back. One is just to watch the movie in the usual way, with a range of different languages and a ‘Director’s Commentary’ available. The other way is to watch it with ‘Commentary’ enabled. This is different to the other commentary, and invoking it sends to the movie back to the start.

This version uses a different playlist and is 101:28 long vs 86:44. The difference is due to three points at which the commentary team ‘pause’ the movie to allow themselves time to expand on an issue. What you see on the screen is the image pausing, and then fading to grey scale. At the end, the colour ramps up again in the moment before movement is resumed. Obviously this ‘paused’ moment demands far fewer bits of data than movements, so you can see these three sections clearly on this bitrate graph: 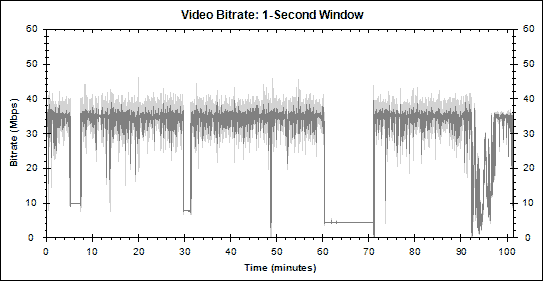 All this is managed through playlists and seamless branching. The main movie consists of six files playing one after the other, while the commentary version has nine: the original six plus three others.

While trying to confirm this I played the three files for the ‘pause’ sections — 00120.m2ts, 00122.m2ts and 00121.m2ts, in order — and noticed that all three files had the main audio with which the movie opens: the 20th Century fanfare, followed by Ralph’s explanation as he appears on their logo, and so on. Further exploration revealed that all the other language soundtracks were also present, along with the other commentary track, and all took their sound from the start of the movie. The exception was the actual commentary track which was supposed to be there. This had the proper comments relating to that section of the movie.

When you’re playing the disc normally, only that commentary section is available. All the other tracks are invisible.

So why are these other audio tracks present on those insert files when they will never be played? My guess is that the requirements of seamless branching include having compatible audio tracks. All those other languages exist in the main part of the movie, so presumably they must exist for that seamless matching together in the pause sections. I could be wrong here, but let us grant that that is indeed the case.

Some space is still wasted, though. All the audio tracks are constant bitrate, so their content makes no difference to their size. Except for the main English audio track, which is DTS-HD Master Audio, 24 bits, 48kHz. It averages 3619kbps in the movie. If this track were empty, then presumably the amount of data required by it could fall back to the ‘core’ 1,509kbps DTS track. So by including sound in these three files, the disc wastes over 213MB by my calculation.

No criticism here: the movie scores a massive MPEG4 AVC video bitrate averaging over 33Mbps, and still only uses 31.5GB of the available 50GB. But I do find it interesting.

One other point on this disc. In the playlists for both versions of the movie the file 00127.m2ts is listed by BDinfo, and immediately followed by ‘00129.m2ts(1)’. This would suggest that they are alternatives, and indeed they turn out to be. Both are 19 seconds long and contain the Fox promo banner gag running across the screen while Bart is shooting Homer with an air rifle. The 00129.m2ts has this in French rather than English.

So it seems that the WALL-E branching technique is not necessarily required to present multiple language sections of the movie: 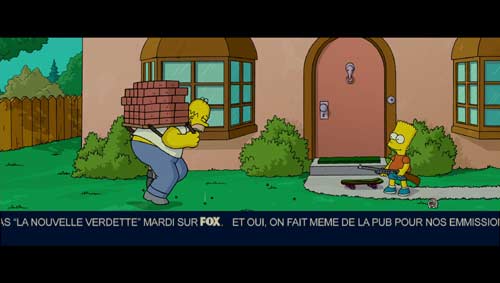