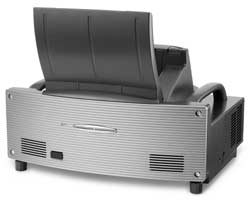 Out comes the calculator. You can typically treat projectors as a point source, at least for approximate calculations. So if it produces a 100 inch picture at 65cm, then it must produce a 40 inch pictures at 40/100*65 = 26cm. Ah hah. Another triumph! Clearly the press release had omitted the ‘2’ from the front of the ‘6’. I still hadn’t twigged that even 65cm (just over two feet) is a ludicrously short range.

I reported the ‘correction’ to NEC’s PR person, who promptly replied that the figures were right, and she supplied another couple of figures. Determined to prove my point, I sketched out a graph, expecting a straight line pointing at the graph’s origin. Oh oh. No way. The graph intersected with the origin at just under 40 inches. How can this be? It would imply that the projector has a huge lens!

Which, in effect, it does. Because it uses a mirror to direct the light, not a lens.

This thing has definite potential. Instead of a projector hovering above your head, it can be up nice and close to the screen … and well away from you. You can probably put some kind of noise reduction around it as well.

The only problem I see is that at the extreme angle from which it projects, some high gain screens may not work well with it (since they are designed to accept and reflect light optimally from directly in front).