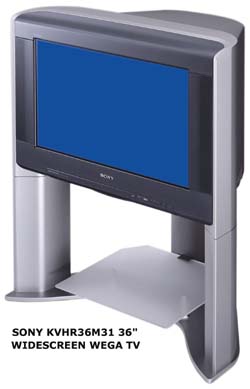 Sony will shortly (September 2003 in Australia) be introducing an 86cm widescreen CRT TV (model KVHR36M31) which it says will increase the number of slits in its grill by 65%, ‘making this the aperture grill with the highest number of vertical slots on the market.’ Since Sony is the principal producer of aperture grill-based TVs (aka Trinitron, which was invented by Sony in the late 60s), this isn’t surprising. But it is welcome. Sony calls this ‘Super Fine Pitch’. I’ll be getting one to review in September. I’m kind of looking forward to it, except for the weight. Such large CRTs usually weigh in excess of 60kg.

Panasonic has also introduced something along similar lines, except it uses the more traditional shadow mask in its TV tubes. Called ‘Fine Pitch’, the TX-76PW150A only offers ‘30% more phosphor dots’ than usual. Since this is a 76cm model, a greater increase in resolution is probably not warranted.

Both these models represent real advances. The last few years have seen some interesting digital processing coming into TVs, but they have always been held back by tubes that offered no physical increase in resolution. This overcomes that.

Both TVs offer 100 hertz scanning, which is PAL’s answer to progressive scan. Panasonic says its TV supports 576p input (but nothing about 480p, given the number of NTSC-only progressive scan DVD players there are out there). Sony says that its TV incorporates DRC-MF (‘Digital Reality Creation – Multi-Function’). While its press release implies support for high definition input (‘it also sets a new standard for viewing High Definition (HD) broadcasts’), it doesn’t actually mention what, if any, input standards it supports.