Which software for grabbing DVD frames?

I’ve been grabbing frames from various Blu-ray discs and DVDs, with a view to setting out some more Blu-ray vs DVD comparisons. I really ought to stop the frame grabbing, and start the comparion setting out.

But I found something interesting when grabbing the last set, from Toy Story 3. As I’ve mentioned before, Disney has taken to corrupting its DVDs with a view to copy protecting them. TS3 was no different, and generally the first VOB causes trouble for the software I normally use to grab frames, VideoReDo Plus (so far the rest of the VOBs have worked fine). Indeed, this VOB normally crashes VRD, even on a ‘Quick Stream Fix’ version of this.

There was one frame in the first VOB that I would have liked to use in the comparison, so I used a different program to grab it: the freeware ‘Media Player Classic – Home Cinema‘. This worked, but the picture was obviously soft. So I tried PowerDVD 8 (now obsolete), and its frame was better than MPC/HC, but softer than VRD. Using mplayer under DOS (which is what I normally use to grab Blu-ray frames) produces a similar result to PDVD8.

Here’s a frame from the DVD: 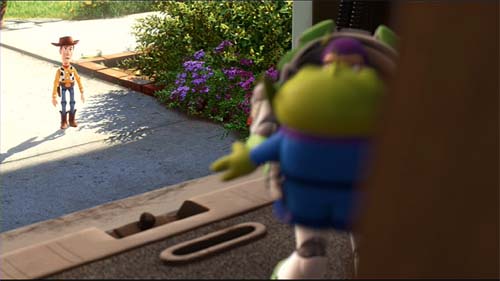 and here’s a detail, unscaled, from the four products. From left to right, VideoReDo Plus, PowerDVD 8, mplayer under DOS and Media Player Classic – Home Cinema.

And here’s another detail:

This entry was posted in Computer, DVD. Bookmark the permalink.

1 Response to Which software for grabbing DVD frames?