Years ago I wrote a post in which I mentioned my long search for a good recording of Bach’s Passacaglia and Fugue in C minor. In the end I found a Telarc one with impressive bass. I suggested in that post that:

the modulation of the groove was clearly visible during the loud bits, with (from memory) excursions up to a millimetre or so!

I had to rely on memory since by that time I had long since disposed of the LP, having replaced it with the CD version. But it turns out that I’d disposed of it by giving it to my brother, who has returned it to me.

So, a close examination of the disc shows that my memory was exaggerating. But, still, the groove modulation remains visible to the naked eye, clearly so. Here’s a photo. The scale to the right shows one millimetre notches. 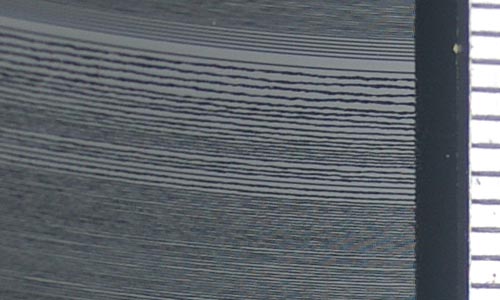 Now, imagine that you had a recording with such powerful bass all the way through. The way I see it, the grooves in those loud bass parts are spaced at about three per radial millimetre. You get about 75mm, measured radially, of space for a recording on a 12 inch LP. At 33 1/3 rpm, that means that a whole side with groove spacing like this would provide less that seven minutes of recording time.

And that is taking into account the RIAA Equalisation which reduces the modulation of the deep bass by up to 20 decibels. Without that, the groove spacing for the finale of this piece of music would really have been something like a full millimetre.

This entry was posted in Analogue, Vinyl. Bookmark the permalink.