Direct Stream Digital (DSD) is the digital format used by Sony in the Super Audio CD (SACD). But SACD is only one form in which it is used. I seem to remember that back in the day, Sony was promoting it as the best digital format for audio archiving. Something about robustness.

Perhaps. But my problem with it is accuracy. Namely, it isn’t very, compared to the alternatives (ie: PCM). Recently I did a piece (should appear early 2012) for Australian HI-FI in which I explain how DSD works (single-bit pulse density modulation: the more 1s, the higher the wave form at that point), and how it terms of resolution it comes in around the same as PCM at 117.6kHz and 24 bits, or 141.12kHz and 20 bits.

But Sony claims a ‘theoretical’ top end of 100kHz, which would imply a bit depth of just 14 bits!

Fortunately, Sony uses noise shaping to move all the quantisation noise up to the HF area were it is less noticable. If you measure the output of an SACD player, you will find that the output of the signal, looked at by frequency, falls away from the audible band up to maybe 25,000 to 30,000 hertz, and then starts to rise again. That rise is the level of HF noise DSD generates.

I measured snippets from the analogue outputs of an SACD player for a few SACDs to illustrate the point. So far as I know, there are no tools to even play an SACD in a computer, let alone extract its digital content for direct analysis.

The 2003 version is clearly the same as the SACD version. So I ripped the audio out of this as six 24 bit, 96kHz PCM files and had a close look at the front left channel. Here is the frequency spectrum for this channel for the entire disc (ie. all ten tracks): 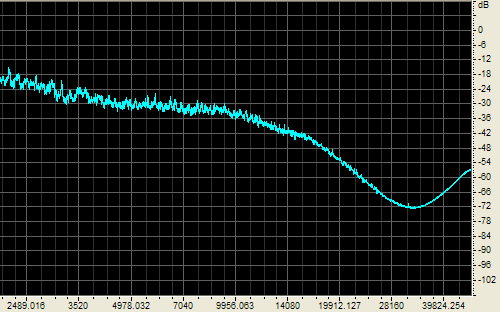 As you can see, this is only shown from around 2kHz. The bottom of the dip — the point at which the ultrasonic noise inherent in DSD overwhelms the signal — is around 32kHz.

Remember, the digital data being analysed here was carried on the disc in PCM format, which has no such problem. This is a DSD issue, and because the final mix was prepared in DSD, it carries through into PCM.

Just to show how inherent this quantisation noise is in DSD, here is the spectrum graph for the three seconds of near silence between the first two cash register ka-chings of the track ‘Money’: 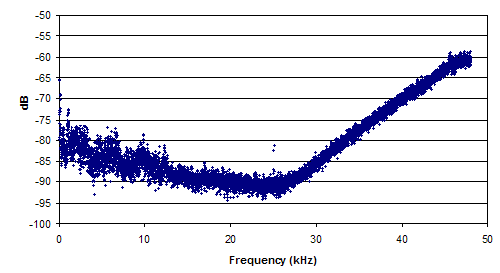 I used different software, obviously, and note that this one is the full spectrum, but with a linear rather than logarithmic X-axis.

Let me stress once again, had the mix been converted from analogue to PCM rather than analogue to DSD, then that rising noise would not have been there.

As for an archival medium, what a dreadful choice!