3D Crosstalk is Always and Everywhere a Timing Phenomenon

Sorry about the title. I’ve lately been listening to a lot of economics podcasts, and the phrase (attributed to Milton Friedman) ‘Inflation is always and everywhere a monetary phenomenon’ popped into mind.

But like Friedman’s aphorism, I’m increasingly convinced that my title is largely true.

Over at HighDefDigest Josh Zyber was struggling with the causes of crosstalk a few months ago. He thought that maybe it was due to content, maybe to the display tech.

I am pretty confident that it is not the content, assuming that the content is competently done. Sure some content seems more subject to crosstalk than other content, but that’s because different 3D display techs are better at eliminating crosstalk from some colour and brightness combinations than others.

There are only two ways that can happen, as I explained here. One is by content leaking through the filter on the eyewear if it is insufficiently opaque to the other eye’s image. The other is due to timing: where, for example, some part of the left eye image is still being shown on the screen after the liquid crystal shutters in the glasses have switched over to letting the right eye see.

There is some of both. Passive LCD TVs don’t have the timing issue at all, so any crosstalk is entirely due to insufficient opacity. And there is no doubt about it: passive TVs perform enormously better on crosstalk than active TVs (although with our current state of technology, they lose half their resolution). But they still have a very low level of ghosting, so there is some leakage through the polarisation system.

But even better than passive direct view TVs are active DLP front projectors. These have virtually no crosstalk at all (I have reviewed four models from three brands, so I know).

Now what distinguishes DLP projectors from LCD and LCoS ones? Pixel response time. To quote from a recent review of mine:

[A] Digital Micro-mirror Device … has 2,073,600 tiny, yet moving, mirrors on its surface. This seems like a ludicrous proposition, compared to the solid state alternatives. But, perhaps strangely, these tiny mirrors are a hell of a lot more responsive than solid state panels. LCoS and LCD panels take time in the order of milliseconds to change their state from black to white, or grey to grey. The DMD is two orders of magnitudes faster, at around 16 microseconds.

It’s the timing! When a pixel on a DMD in a DLP projector snaps shut, it does it fast. When a pixel on an LCD panel goes opaque, or one on an LCoS chip goes non-reflective, it takes its time getting there, and in order to allow sufficient brightness, the active glasses have to reveal its state before it has completely gone. Remember, in an active system with 24fps 3D content, the total display time for each frame for one eye is just 20.8ms. Two, three, four or more milliseconds off that, and you’re losing a lot of display time and brightness.

Here is a demo. I haven’t done this with DLP, just active and passive. But it shows the gulf in performance, and believe me, DLP is even better on crosstalk while not having the lost resolution problem of passive LCD.

So what we have here are two TVs, same brand, the top one is active (ie, using shutter glasses), the bottom one is passive (ie. using reverse circular polarisation on alternate lines): 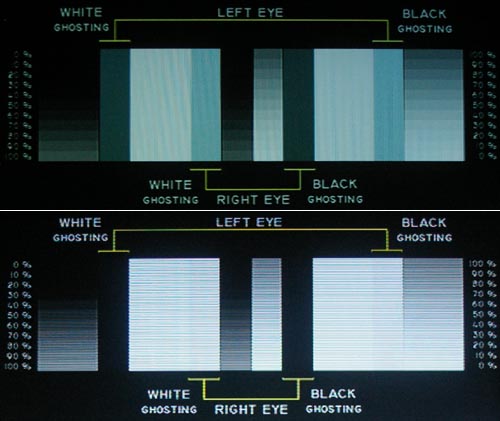 This shows a segment of a still test pattern developed by Werner Bloos (Caution, site in German). I photographed this through the left lens of the respective eyewear of both TVs, so it’s the left eye view we’re interested in. The vertical bar under the yellow line marked ‘White Ghosting, Left Eye’ should be perfectly black. That marked ‘Black Ghosting, Left Eye’ should be perfectly white.

As you can see, the passive TV (bottom) isn’t too far off, but the active TV has tremendous amounts of breakthrough.

So, to summarise, it isn’t the content. It is the ability of the hardware to keep the left and right eye images separate all the way into your eyeballs. And that is mostly due to timing, or at least, the smearing of image reproduction over time.