Nailing Down An Issue

You may have noticed that in my previous post I didn’t mention which Blu-ray player I was using. That’s because I don’t like accusing players of misbehaviour until I’m very certain of my ground. 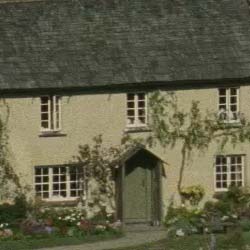 Since doing that post I’ve been doing a bit of work on nailing down what is happening with this player and disc.

First, I wanted to make sure that what I was seeing on the TV screen wasn’t a faithful reflection of what was on the disc, but a failure to properly deliver it. So I grabbed a couple of thousand still frames from the disc to my computer in order to locate the specific problematic sections. In the picture shown here, there was a flickering and instability in the window frames as the camera panned from top to bottom down over this house (the detail is not scaled down from the original frame, it is merely a 250 by 250 pixel crop from the 1,920 by 1,080 pixel original).

All the respective frames looked clean and unmarred. So then I had to check to make sure that the full detail of the frame was being presented in my captures and I wasn’t getting merely a field, scaled by my capture software to full size. I dragged a few representative frames into Photoshop and examined them up close to make sure that all the pixels were unique.

Then, to double check, I grabbed a pile of frames from the Blu-ray version of ‘Naturally Ningaloo‘, a breathtakingly beautiful high definition video compilation of above and below the waters of the the Ningaloo Reef in Western Australia. I know that much of this is from interlaced source material and all of it is held on the disc in 1080i50 format. The frames I grabbed from this showed combing, so I could confirm that my capture software caught everything in a frame, not just in a field.

Then I went back to Miss Potter in the Blu-ray player. I hadn’t let the credits run much on the previous viewing, so I had a closer look at them. A giveaway of poor deinterlacing of progressive sourced material presented in interlaced format (‘progressive segmented frame’ as it now appears to be called) is breakup of vertically scrolling credits and, sure enough, that’s precisely what was happening with this disc.

Towards the end of the credits were three or four sections of still text panels. These are often revealing because by switching between ‘Pause’ and ‘Play’ I could compare the picture in a lot of detail. Some Blu-ray and DVD players do not handle 50 frame per second material well on ‘Pause’ and always drop one of the fields, giving you only half the resolution. This player (the Samsung BD-P1500) does that. It was clear from these sections that the text was more completely and smoothly presented when playing that when paused.

That meant that the player was not employing drop field deinterlacing during playback, and was using cadence detection, some form of motion adaptive deinterlacing or both. Detecting the steady sections during the display of these fields they were being rendered with full detail (ie. woven).

To further check all this, I switched the output of the player to 1080i rather than 1080p, so that would leave it up to the TV to do the deinterlacing. As I mentioned in the previous post, I’m presently using Pioneer’s new fifty inch ‘entry level’ plasma, the PDP-C509A. This has basically the same video processing as the more expensive LX models and in my experience can do tricks with 576i material that no other video processing circuitry I have ever seen can perform.

For example, I have a 576i test clip in which the movie is showing, but some text scrolls across the bottom of the screen. The text was inserted by the TV station and is interlaced. To display this every circuit I have used treats it as film sourced, in which case the text shows strong combing, or video sourced, in which case the progressive video behind the text is somewhat mutilated. These Pioneer TVs can deliver full resolution for the video and deinterlace the text at the same time. How I do not know. I think it may be black magic.

Anyway, this was very instructive. The two problematic parts of the movie then played back with excellent stability, with no suggestion at all of any deinterlacing issues. At first glance, the scrolling credits were the same.

Then I looked more closely. As the text credits appeared at the bottom of the picture frame, they were indeed flickering and unstable, but as they made their way up the screen, typically before having passed more than a quarter of the way up (the relatively narrow 2.35:1) height of the display area, they locked into stability. The Pioneer’s video processing circuitry, it seems, had to examine each line of text as it appeared at the bottom to work out what to do with it.

This is going to be a very useful disc.

This entry was posted in Blu-ray, Disc details, Testing, Video. Bookmark the permalink.