Last night I watched a pretty decent 1950 noir movie, The Damned Don’t Cry, which I recorded a little while ago from GEM. GEM is of course a HDTV station which means, here in Canberra, a 1,440 by 1,080 interlaced signal.

It looked really quite nice, with the dramatic black and white photography managing to be presented sharply, with not much noise. Good movie, too, except that Joan Crawford is way too old for the main character, and looks it.

Contrast this with an other GEM broadcast, a fairly gritty British war drama from the previous year, The Small Back Room. This is in large part about the bureaucratic mindset, even in the midst of war.

But my attention was constantly distracted by picture quality issues: specifically, there was visible combing as though it were being deinterlaced poorly. I’ve noticed this previously on mainly British 1940s and 1950s fare. I spent a fair bit of time fiddling with the deinterlacing controls on my home theatre receiver, to no avail. So I decided to examine it more closely in the computer.

Here’s a frame about a third of the way in, and underneath it is a detail from that frame, blown up to double the actual size: 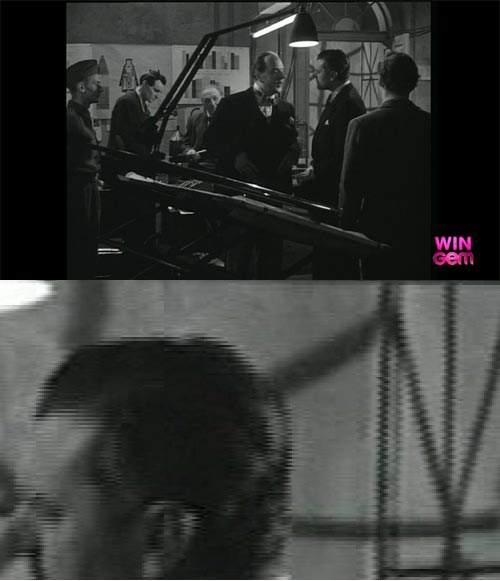 If you look at this closely, you will see that the image is actually interlaced at 1080i, but that is nothing that would cause any problems with modern video processing. What was more troubling were the remaining jaggies, as most clearly seen in the window frame to the right of the man’s head.

So what could that combing be?

A clue can be had by counting them. I counted twenty full cycles of combing in 75 vertical pixels in the image. Translated to 1080 pixels, that comes to 288 combing cycles

, which is of course half of 576, which suggests that the video came from an interlaced source at 576 line resolution per frame, 288 per field.

So why the combing? I’d suggest that the film spent time on standard definition interlaced video with a slight misalignment between fields.

Fortunately, this is an example of the lower quality stuff on HDTV. But some of the content is, by contrast, really very good.

BTW: free to a good home (Australian mailing addresses only) Season One of the Australian TV drama ‘Crownies’ on Blu-ray. No boxes, test discs (there are four). Fact is, I haven’t been able to bring myself to watch them, and I doubt I ever will. First in comments gets ’em.

This entry was posted in HDTV. Bookmark the permalink.