As is Warner Bros’ habit, the Blu-ray of Batman Begins doesn’t really have a main menu. When you insert the disc, the player shows an FBI warning, 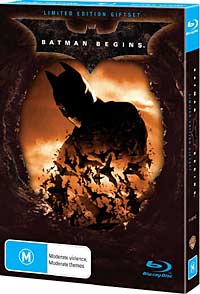 then the Warner Bros logo, then reads off some BD-Java code and then starts playing the movie straight away. If you want to do something you hit the pop-up menu button. The ‘Top Menu’ button doesn’t do anything. When the movie gets to the end, the disc runs through some copyright panels, and then presents the ‘Special Extras’ menu over a still shot from the movie.

Because there are very extensive special extras, this menu is quite large. In fact, it seems to use rather more than a half of the screen area, and because it is presented as a box, it looks like it uses even more.

If you invoke this from the pop-up menu (which is presented as a bar across the bottom of the screen), it appears in different ways depending on the player. For the Sony Playstation 3, it slides smoothly up from the menu bar over the course of a second or so. With the Yamaha BD-S2900, which I have the disc in right now, it also slides up, but just a little jerkily. A couple of months ago I used the Olin OBDP-1000 Blu-ray Player, and this also slid up the extras menu, but very jerkily, as does the Samsung BD-P1500.

However, if I use the Sony BDP-S350 or BDP-S5000ES Blu-ray player, or the LG BD300 (from memory, this one, so I could be wrong — I had to surrender it back to LG), the menu just snaps up into place instantly, rather than slides up.

Incidentally, one especially nice thing about Batman Begins is the BonusView PIP feature. The information it offers is interesting enough, but I’m talking about its implementation. Every other BonusView feature I’ve seen, so far, essentially requires the movie to restart. This one just switches it on or off at the point in which you’re in the movie without otherwise affecting playback.

This entry was posted in Blu-ray, Disc details, Equipment. Bookmark the permalink.