Another view: high res audio is a waste

If you want to know lots about how digital audio works, and a pretty damned convincing explanation as to why high resolution audio (24 bit, up to 192kHz sampling) is a waste, I can’t recommend too highly this piece from by Monty Montgomery from xiph.org: ‘24/192 Music Downloads … and why they make no sense’.

There is one small divergence in my views. I think the claim that sound might be degraded by intermodulation distortion due to ultrasonic content is overblown. Technically I’m certain it could make an appearance. But I note that the test file for this contained in the article carries two sine waves at 30 and 33kHz

, both of which are around -6dBFS. In real world recordings content above 20kHz is very low, typically -60dB or more. Here, for example, is the spectrum of the output of the two channel SACD version of ‘Money’ from Pink Floyd’s Dark Side of the Moon … a loud bit, normalised to full scale: 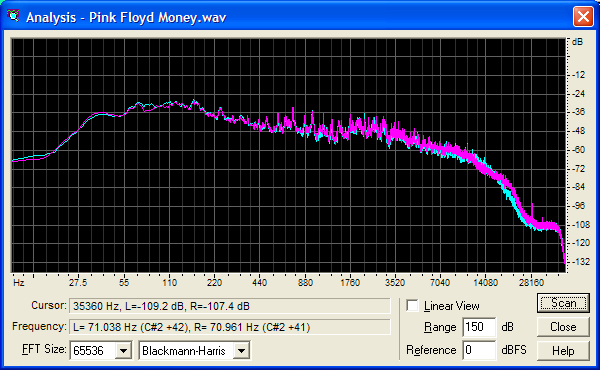 Notice that at 20kHz the output is around -84dBFS, and it rapidly falls to over -100dBFS? Any IM products these produce would be way below audibility.

The one thing I’d add in support of the piece, but which is not covered therein, is that 24 bit audio blows out the download file sizes disproportionately for the losslessly compressed versions, roughly doubling them in my estimation, rather than increasing them by the expected 50%. (The reason why is here.)

(Also, I have a test pressing of The Three Musketeers — no box, no slick — for the first to request it in comments. Australian postal addresses only.)

This entry was posted in Audio, Codecs. Bookmark the permalink.

2 Responses to Another view: high res audio is a waste