You’re never quite sure what you’re going to get

Posted on February 1, 2015 by Stephen Dawson

Last year I reviewed the Western Digital TV Live media box for Sound+Image, along with a bunch of other media boxes, and I gave it high marks, not the least because of its ability to handle high resolution audio. For that test I used the HDMI output only.

The thing is still sitting around here, so I thought I’d give the analogue output a whirl, just for fun. This is a 3.5mm socket for left and right audio plus composite video. I tested it on 44.1kHz stuff and got a mediocre-ish result. Noise floor around -94dBA

, frequency response down 1.1dB at 20kHz. The kind of result that we would have killed for back in the 1970s, but a bit ho-hum by today’s standards.

Then I checked out 24 bit, 96kHz performance. Noise a touch better at slightly over 95dBA, but still pretty poor. The frequency response was down by 0.5dB at 20kHz, and then dropped away as though hitting a brick wall filter. This clearly wasn’t 96kHz output. So I figured I’d plug the WD TV Live’s optical output into a good quality DAC for comparison. I used the low cost, decent enough Silverstone EB01-E. It delivered a much better noise performance, consonant with 24 bit audio. Its output was down by only a quarter of a dB at 20kHz, but fell away as though hitting the same brick wall. Could it be that the WD was downsampling 96kHz? I plugged its HDMI output into a home theatre receiver that reports the audio sampling frequency, and it reported 96kHz. I plugged the optical output into a different DAC

, one with sampling frequency indicators, and it showed 48kHz, not 96kHz.

So it seems that the WD TV Live can do high resolution audio output via HDMI, but not via analogue or optical out.

Here’s the response of the analogue output, the optical (via Silverstone) and for comparison the Silverstone being fed 24 bit, 96kHz directly from a computer: 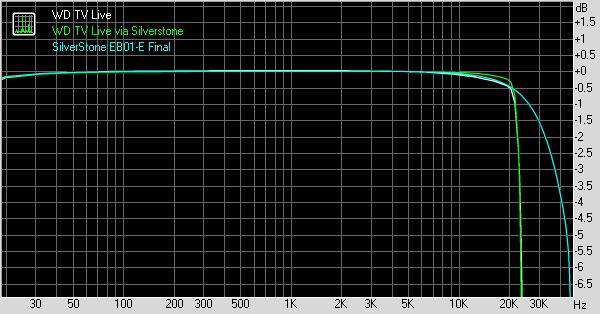 You may be wondering why the Silverstone delivers a higher output at 20kHz when being fed the downsampled signal via optical than when it is receiving the full 96kHz via USB. With 44.1/48kHz signals they’ve gone for a sharp filter, but with 96kHz and higher they seem to have settled on a slower, gentler one.

When it came to noise, the WD TV Live to Silverstone delivered a much, much better result that the device’s own analogue output: 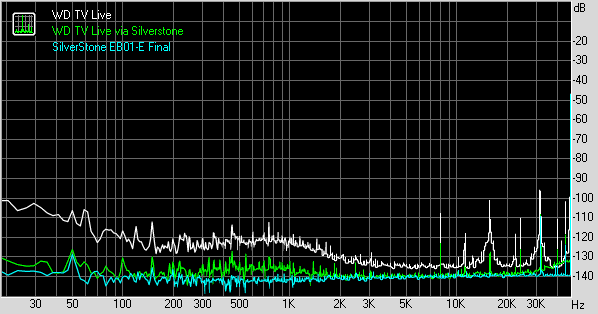 This entry was posted in Audio, Testing. Bookmark the permalink.