Posted on February 4, 2010 by Stephen Dawson 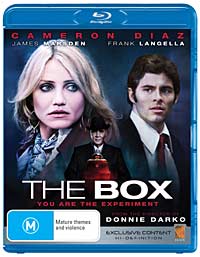 … or both. The latest Richard Kelly movie, The Box, will be appearing on Blu-ray in Australia from Icon Film Distribution on 10 March 2010. Last night I examined the disc and found it to be the first disc I have seen with the audio in both Dolby TrueHD and DTS-HD Master Audio, both 24 bit, 48kHz, 5.1 channels.

For the moment, while I try to confirm this, I am going to assume that they are both encodes from identical sources.

If that is the case, it makes their average bitrates quite interesting. According to BDInfo 0.5.3, the average for the Dolby TrueHD version is 3525kbps, not counting the 640kbps Dolby Digital core, so the total load is 4165kbps.

The average for the DTS-HD MA version is 4519kbps, including the 1509kbps core. So Dolby TrueHD would seem to be more efficient, even carrying the dead weight (for those of us with fully capable gear) of the DD core.

Possible reasons? The DTS core, which forms part of the total DTS-HD MA system, is constant bit rate. There may be sections where its capacity exceeds that needed to completely and losslessly encode the entire audio track.

Perhaps, but this seems to be unlikely to make a huge difference because with this movie the DTS is apparently 24 bits deep. If so, then it is unlikely that it could losslessly encode all but the most inactive sections of the sound track.

(By contrast, the commentary is also presented in DTS-HD MA, albeit with 16 bits and 2 channels. This has a 1509kbps DTS core, but the whole average bitrate comes to just 1589kbps, so only an average of 80kbps was needed to bring the core into perfect alignment with the original signal. That would imply large parts of the DTS core being under-used.)

So it could well be that Dolby TrueHD really is more efficient than DTS-HD MA, at least with 24 bit material.

Update (1:42pm): Icon Film Distribution has confirmed to me that ‘both HD tracks on The Box were created from the same 5.1 audio master.’ Also, it fully intends to include both the lossless audio versions on discs where there is sufficient space, as part of its desire to ‘make our BD’s as “feature laden” as possible not only with special features but also technical features.’

So it looks like we’re going to have more movies to compare DTS-HD MA with Dolby TrueHD (although, as its ‘preferred audio format’, DTS-HD MA will be used if there is space for only one).

Update 2 (4:54pm): I’ve just scanned The Broken, also from Icon Film Distribution, and this also has both audio formats, albeit in 16 bit rather than 24. The total bitrate for TrueHD stream is 1173+640kbps, equals 1813kbps, or very slightly less than the DTS-HD MA bitrate of 1,819kbps.

This entry was posted in Audio, Blu-ray, Disc details. Bookmark the permalink.

8 Responses to The Box – Dolby TrueHD or DTS-HD Master Audio?