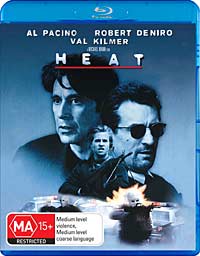 Courtesy of Warner Bros, from 30 October 2009 I have three copies on Blu-ray of the excellent movie Heat (1995) to give away. This is a must-have, not only for the excellence of the movie, but the superb street gun battle and airport scenes, presented in lossless Dolby TrueHD 5.1.

I’m doing the giveaway in conjunction with a survey in which you can participate. The idea is that you download some screen captures of the same frames from the same movie, but taken from different Blu-ray versions, and see if you can work out which is which. Australian residents will be eligible for the Heat prize in the first one, which is here. Future surveys will be accessible here. I’m hoping to have more prizes available for them.

This entry was posted in Blu-ray, Compression, Giveaway. Bookmark the permalink.