Scale once, not twice

Posted on November 5, 2007 by Stephen Dawson 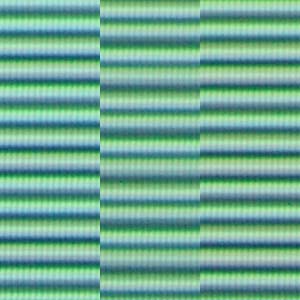 Last night I was fiddling around with the output settings of a new Pioneer DV-LX50 DVD player, which can upscale all the way to 1080p. I was using an Optoma HD-81LV DLP Projector with a native resolution of 1,920 by 1,080 pixels. I played one of my test DVDs. This is in PAL format and the picture consists of 288 horizontal black lines, interspersed with 288 horizontal white lines. Looking at this vertically, each output pixel alternates between black and white.

The graphics to the right shows the results of three different scaling strategies I used. On the left, the Pioneer was outputting at a resolution of 576 — native to the DVD — and the scaling up to 1080 was performed by the Optoma. On the right the Pioneer was scaling up to 1080 and the Optoma was mapping each incoming signal pixel to its display pixels without alteration.

But for the section in the middle, I set the Pioneer to upscale to 720, so the Optoma then had to upscale from 720 to 1080. In other words, the picture was scaled twice.

The fine grid you can see in the pictures is the actual pixel structure of the projector. You can see that the horizontal black and white lines are more evenly spaced and more even in thickness for the left and right sections, where the image was scaled just once in each case, than for the middle section where the picture was scaled twice. On the full screen this is even more obvious.

What I didn’t notice when I looked at the screen, but now becomes apparent since I’ve created this composite, is that the dynamic range has been reduced as well by the double scaling. The blacks are not as black, and the whites are not as white.

So, in general, don’t scale twice. If your video source can’t output a signal that precisely matches the display’s resolution, then output the video at its native resolution and let the display do the scaling.

Next time I have a panel display with the common vertical resolution of 768 pixels, I shall repeat this test since this is a scenario applying to many installations.