Posted on November 1, 2007 by Stephen Dawson

When Toshiba launched its HD DVD players last year, in answer to my questions at the official launch, it seemed to be unaware of the whole 1080p24 vs 1080p60 thing. But a few months ago Toshiba Australia promised that by year’s end their 1080p-capable HD DVD players would be able to output 24 frames per second video from movies.

This format, called 1080p24, provides the most natural looking video possible because it precisely matches the rate at which the film camera shoots the film. Processing is reduced, the notorious ‘3:2’ pulldown is eliminated, and the picture moves smoothly and realistically.

I confess to then being a little skeptical, but a couple of weeks ago the firmware upgrade to support 1080p24 was released without fanfare. I only noticed because the first thing I did on taking a Toshiba HD-XE1 out of the box was plug it into my computer network and run the ‘update’ procedure. If you’re planning on doing the same, allow the unit an hour or so to do its stuff. When it had finished, the firmware was set to the latest v.2.5.

It certainly seemed to work well enough, generally providing improved motion smoothness on various scenes, although there was the odd lip sync issue, which has also been mentioned in some forums. I used the unit with the new InFocus IN82 1080P DLP projector and a Sony HD LCD TV. One thing that puzzled me slightly was that the InFocus signal information screen reported that the signal was at a frequency of 24.00 hertz. So what? That’s what it’s supposed to do, eh?

This was a small puzzle that I didn’t bother to pursue, other than idly thinking that maybe this was the source of the lip sync problem. But last night I noticed something I missed earlier. The InFocus IN82 signal info screen reported that the Toshbia HD-XE1, when set to ‘up to 1080p/24Hz’ output, was actually delivering a slightly odd resolution.

Here’s what the InFocus reports with a regular 1080p24 signal, in this case delivered by the iScan VP50PRO: 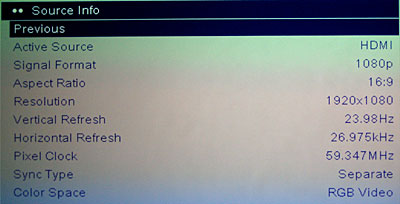 And here’s what the projector reports with Toshiba’s version of 1080p24: 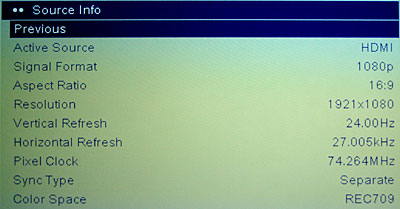 You can see the difference on the vertical refresh line that I’ve discussed. But now look at the resolution line. The normal signal is 1,920 by 1,080 pixels, whereas the Toshiba appears to be outputting 1,921 by 1,080, or one extra pixel in the horizontal dimension. Weird.

Sometimes displays report slightly different information due to rounding errors and such, so I thought I’d better confirm this. I figured that if I used a 1080p high resolution test disc, with an image which switches on and off each pixel in a regular grid, this should show marked distortion with this small amount of scaling. So I used the HD DVD version of Digital Video Essentials and chose the phase test. Here it is how it should look. This was delivered by the Toshiba HD-XE1 with its output set to 1080p60 (the InFocus IN82 reported a resolution in this mode of the correct 1,920 by 1,080 pixels):

This looks as it should. But here is the same pattern, delivered by the same unit, but with its output set to 1080p24:

This banding is a very low frequency version of the ‘beat’ I talk about here.

To give you a better sense of this test picture, here is a closeup showing the individual pixels, first for the output delivered at 1080p60, and therefore at the correct horizontal resolution: 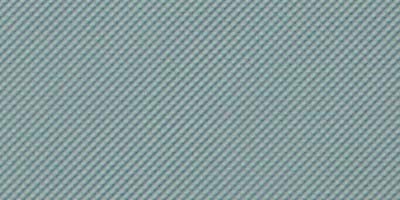 And here with the output delivered at 1080p24, and therefore with one pixel too many horizontally, causing a pattern: 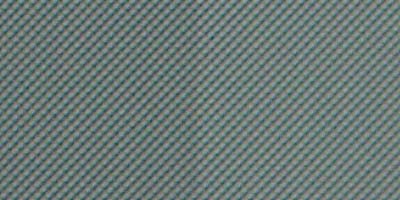 It looks like another firmware upgrade may be required.

This entry was posted in Equipment, Firmware, HD DVD. Bookmark the permalink.