Posted on November 2, 2006 by Stephen Dawson

On Monday I drove up to Sydney for the launch of HD DVD by Toshiba and Castel Electronics, Toshiba’s Australian distributor. Toshiba will be releasing two HD DVD players in the near future.

First, on 10 December 2006, there will be the HD-E1, its entry level model, priced at $AUS1,099. This will feature an RJ45 network connection and a couple of USB ports, both of which are provided for future functions that may (or may not) be included on HD DVDs. A little surprisingly, its output is limited to 1080i. In February next year it will release the Toshiba HD-XE1, a higher specified model, distinguished primarily by it offering 1080p output, and sporting higher quality build and components (it weighs 6.2kg to the cheaper model’s 4.1kg). It will also have 5.1 channel analogue outputs for internal decoding of the new audio standards available on HD DVD. Finally, it offers a version 1.3 HDMI output versus the 1.2 on the HD-E1. The main difference for consumer electronics purposes is that HDMI 1.3 supports ‘Deep Colour’, a new colour specification that encompasses a wider gamut that all former electronic colour encoding systems. How effective this will be depends on discs making use of it and displays providing support. That could be interesting.

Also present were representatives of Universal, Paramount and Warner Bros. Universal will be providing only HD DVDs, whereas the other two will be providing both HD DVDs and Blu-ray discs, typically releasing both at the same time. They all say that their disc pricing will be at a moderate premium to DVDs. I would expect that they will follow Sony Pictures Entertainment’s plans to go with $AUS39.99 for ‘catalogue’ items (ie. movies that have already been released on DVD), and $49.99 for releases of new movies. Incidentally, Universal’s movie Apollo 13 will be included for free with the Toshiba HD DVD players, and in fact will, for a few months, only be available with those players.

Now here’s where things get interesting. In the press release (it doesn’t seem to be available on line, so right-click here to download it – 414kB PDF) provided at the launch there was a footnote on the specifications. This said:

HD DVD discs containing high definition content at a field rate of 50Hz or a frame rate of 25Hz cannot be played on HD-E1 and HD-XE1 without a firmware update. Firmware update is expected in the future. Should you have any question about the frame rate of your disc, please contact the disc vendor.

Get that? The Toshiba players won’t, initially at least, support 1080p25* or 1080i50 discs. That ought to ensure that all HD DVDs released in Australia in the near future are encoded at 1080p24 or 1080i60. Eventually this must change. After all, there will be some material recorded in 1080i50 emanating from TV studios in Australia, the United Kingdom and Europe, and support must be provided for these. It’s odd that they are aware enough of the issue to include a footnote, but haven’t made the necessary firmware upgrades yet. 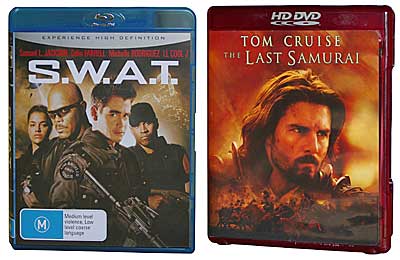 Naturally, noticing this footnote (I am bit of a nerd at these things, and read the press release during the drinks before the event starts), I was prompted to ask: are Aussie HD DVDs going to be ’60 hertz’ releases. By 60 hertz, I mean with a native frame rate of 24 frames per second. Films encoded on a disc at 24fps simply cannot be shown at 50 hertz without an enormous amount of processing (or, theoretically at least, some shortcuts that would result in horrid picture quality).

The answer was ‘yes’. These three studios propose releasing all their movies in exactly the same format as their US releases. So what they get there, we will get here (eventually). Further, Warner Bros and Paramount said, their Blu-ray and HD DVD releases will to be identical, aside from the format of the disc on which they appear.

I followed up by noting that the first generation of Blu-ray players available in Australia, when dealing with 1080p24 content, deliver it at either 1080i60 or 1080p60, resulting in a rather nasty jerkiness during camera pans and some on-screen movement. I wondered whether a Toshiba HD DVD player with support for 1080p24 output is planned for the near future.

The Castel Electronics chap who was MCing the event hand-balled that one to the three chaps from Toshiba, Japan, who had flown out for the occasion. They explained that the HD DVD specification does not, as yet, provide for 1080p24 output. However it is under consideration.

So there you have it. Assuming that 20th Century Fox follows the trend, virtually all new HD formats will be encoded at a US style 1080p24, and this allows for the truest replication of the original movie yet. But all current players will output the video at 60 hertz, introducing cadence problems, which manifest themselves visually as judder during camera pans (because of the higher resolution, this is actually more noticable with HD DVD and Blu-ray than it is with US DVDs).

(*) What’s all this crap about 1080p24 and the like, you may ask. Video is defined by three attributes: its resolution, the manner in which the frames are delivered, and the speed at which they are delivered. So 1080p24 means a vertical resolution of 1,080 pixels (this may have a horizontal resolution of either 1,920 or 1,440 pixels). It means that the frames are either held as whole frames, rather than broken up into two interlaced fields, on the disc, or are held as two fields but easily able to be reconstituted into a whole frame. And it means that the frames are deliverable, or delivered, at 24 frames per second.

Since film frames have for many decades been standardised at 24fps, this is the ideal means of delivery. In places like Australia, Europe and India where we have used 50 hertz TV systems, films have been loaded onto DVDs at 576p25 or 576i50 (typically the latter, to be pedantic about it, but the two fields can be easily woven together into 576p25, then doubled to 576p50, for output). Since each of the film’s 24fps frames was translated intact to a DVD’s 24fps frames (for all practical purposes), movies on DVD in Australia play back some 4% faster than their cinematic and US equivalents. Blu-ray and HD DVD seem intent on eliminating this loss of fidelity, so good on them.

This entry was posted in Blu-ray, HD DVD, How Things Work. Bookmark the permalink.