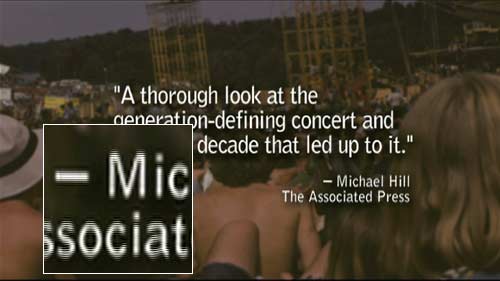 I have just been looking at the second disc of the brilliant ‘Ultimate Collector’s Edition’ Blu-ray version of Woodstock: 3 days of peace and music. One of the extras on this disc is a five minute featurette called ‘The Museum at Bethel Woods: The story of the Sixties & Woodstock’. This is presented in 1080i60 format (VC1 encoded), but it doesn’t look sharp enough to justify that HD format.

I’m 90% sure that it has been upconverted from 480i60. And that the conversion was an astonishingly poor job.

Obviously I’m far more familiar with issues of converting 576i50 to 1080i50, so it was startling to see an obvious marker of poor quality of the kind with which I’m familiar. The picture to the right is a full frame (which I shrunk, obviously), with an detail of the frame in the box. That detail was not scaled by me, so that’s what you would see on a full high definition display. Notice the horizontal lines near the top and bottom of the characters: that is an artefact of poor deinterlacing and scaling. I see it all the time with cheap high definition set top boxes. They apply a simple bobbing style deinterlacing technique to SD (ie. 576i50) transmissions, then scale the result up to 1080i50, producing those lines. 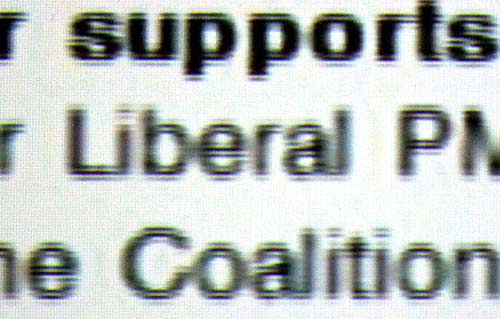 It actually looks somewhat like the Chroma Upsampling Error except that it affects not the colour channels but the luminance one.

The picture to the right is from a photo of a display produced by one of those low quality HDTV receivers, upsampling SDTV. There is more on this here, including a picture of how this kind of thing is supposed to look. It seems to appear most commonly when that bobbing deinterlacing is applied to progressive scan material (as still graphics must always be, for course).

But that’s a cheap consumer-level TV receiver. What’s surprising is that this should happen on professional level upscaling performance for video release on Blu-ray. And, of course, had this been presented on the disc in 480i60 format, the best of consumer technology — pretty good stuff these days in a lot of cases — could have been applied to upscaling the picture. The results would have been better than as delivered on this disc. The video on the disc is irrepairably damaged. Nothing you can do can significantly improve it.

This entry was posted in Blu-ray, DVD, Interlacing, Video. Bookmark the permalink.