I have a little bit of sympathy for DVD distributors who used pan and scan for some of their titles, at least in the early days. Back then the vast majority of TVs were still 4:3, and that was what the viewers had been entirely used to.

Of course, I prefer the original movie presentation, which for most movies produced since the mid-1950s and many TV shows since the early 2000s has been widescreen.

But the worst possible presentation on DVD has been non-anamorphic widescreen. Here I describe what anamorphic video is in the DVD context. In essence, it means that the picture is distorted prior to being laid down on the disc, squeezed horizontally, and then is expanded out horizontally by the DVD player during playback. This allows the full height of the picture to be used.

Non-anamorphic widescreen achieves the correct aspect ratio by instead inserting black bars in the top and bottom of the frame. Consider the superb 1962 movie, To Kill a Mockingbird. Here’s what I wrote in my review of the DVD:

The movie was filmed in black and white at a time when colour was the Hollywood norm. Despite this another Oscar was earned for Art Direction. This makes the DVD all the more disappointing. Although presented in a widescreen (1.85:1) ratio, the DVD is not anamorphically encoded and consequently suffers from a lack of resolution of detail. This matters little on the closeups of faces, but there are many distant shots and much of the movie is set in a packed courtroom, the occupants of which seem on this disc to be only sketchily represented. Even the regular outdoor shots, with their high contrast and lush Southern US foliage, look busy and borderline aliasing constantly distracts the eyes.

Now here’s a frame from the disc, in the original aspect ratio as held on the Australian DVD: 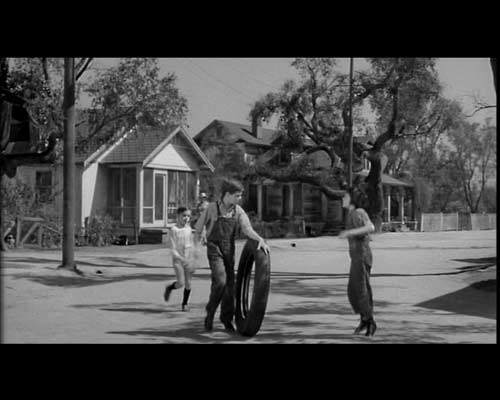 Note how of the 576 vertical pixels available, only 412 are actually used. The remainder merely store blackness. In other words, 28% of the potential picture resolution is simply thrown away.

Universal later released a 2 disc special edition of this movie, but the movie disc was the same as the original release. To date there is still no anamorphic version of this movie available in Australia.

But a week ago the movie was broadcast on ABC2 on a Saturday night. I recorded it and was pleased to see that the movie was anamorphic. Here’s a frame as it would have been broadcast packed into a 720 pixel wide frame: 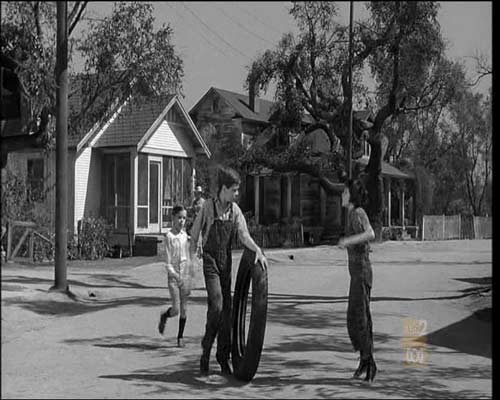 If you watch these on a widescreen TV, this is what you will see (first the non-anamorphic DVD, then the anamorphic TV broadcast): 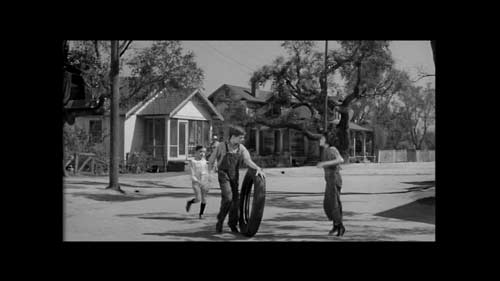 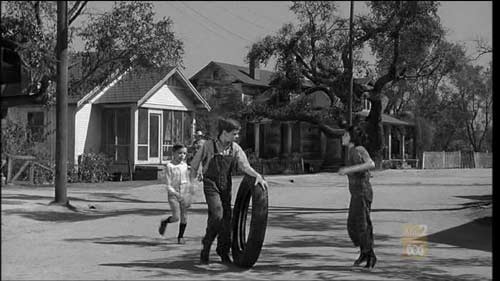 As you can see, the picture is much smaller from the DVD than from the free to air transmission. But on a widescreen TV you can always select ‘Zoom’ and have it fill the screen. Here are a couple of examples from the movie for the differences when you do that. The top of each is the full frame from the TV broadcast, and underneath is a detail. The left side is from the DVD, the right from the TV transmission.  The DVD side was scaled up as though the Zoom key on the TV had been pressed, so you can compare the two. First, here’s a frame not long before the one shown multiple times above: 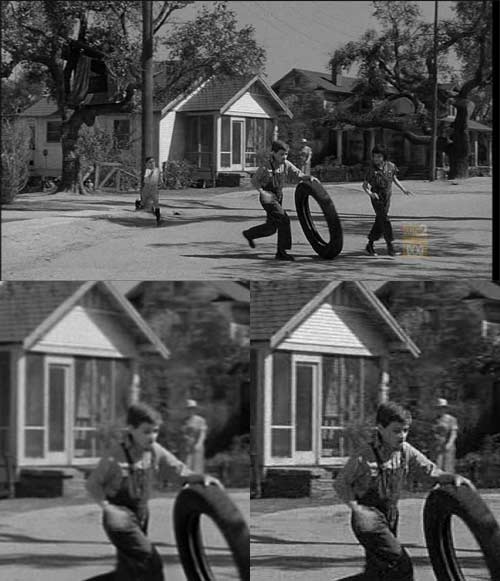 And now is a night-time scene just after the classic confrontation outside the lockup: 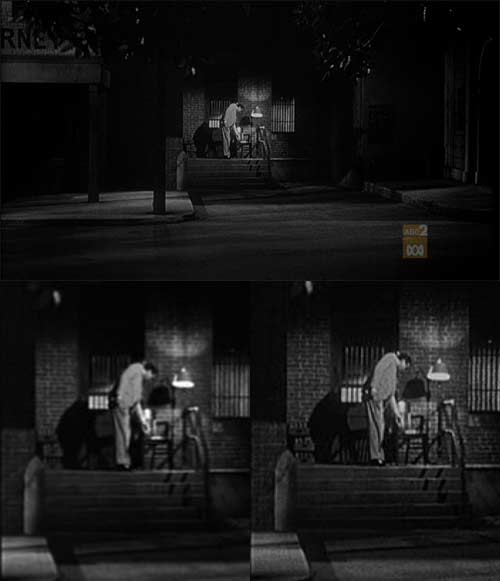 Both of these show that there is an immense amount more detail on the free to air broadcast than there is on the DVD, and the TV version certainly looks a lot sharper.

I should add that the FTA version is still pretty weak, but for a different reason. The average video bitrate for the DVD is 4.18Mbps, and remember that is being used almost entirely for a smaller picture, since the black bars don’t require many bits when compressed.

The FTA broadcast offers a video bitrate of just 2.95Mbps, and this manifests mostly as MPEG2 noise in the image, especially around fine detail. That can make it a bit hard on the eye.

There’s probably no point issuing a proper anamorphic TKaM now, because surely a Blu-ray version can’t be too far away.

This entry was posted in Compression, DTV, DVD, Video. Bookmark the permalink.